When thinking of ‘Found-Footage’ films, supernatural horror successes such as REC; The Blair Witch Project and the Paranormal Activity films spring instantly to mind: you expect jump-scares to be bountiful and the horror to be in-your-face. With Strawberry Flavored Plastic, Director Colin Bemis employs the ‘Found-Footage’ element to immerse the audience in a personality: to tell a heart-felt, impacting ‘mockumentary’.

Two hopeful, aspiring documentarians (Nicholas Urda and Andres Montejo) comb the community, looking for interesting stories, they decide on the tale of Noel (Aidan Bristow). Having been just released from prison for a crime of passion, his story intrigues the duo. There’s just one problem: after several weeks of shooting, the pair discover Noel’s story is completely false. He has never been to prison. What they find out is much, much worse.  Entangled with his activities, they face an awkward decision: do they do the right thing or continue to make possibly the most sensationalized documentary ever? Their decision made, their lives unfold and events fall wildly out of their control. 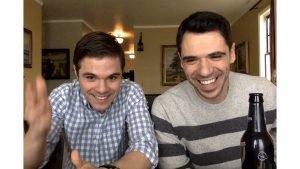 This genre-bending take on the sub-genre works impeccably well. Bemis’ use of tone, editing and characterisation deceive you into thinking you may actually be watching a documentary, aside from a few occasions which can draw you away from the immersion: the shift in tone of the musical montages feels dis-jointed from the film. Even though enjoyable, they felt out of place somehow.

A film such as this relies heavily on having a strong cast: Strawberry Flavored Plastic does not disappoint at all.  Both Urda and Montejo perform as keen film-makers, developing their characters remarkably well. The film shows plenty of their lives beyond the documentary: these are two characters who are impossible to not feel for. Undoubtedly, both characters are out-shined by Noel: man, what a character! 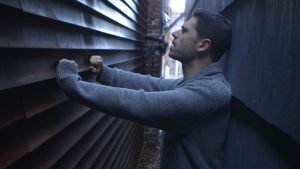 This film is carried completely by Noel, as it should be. This film is about him. This film is him. Such a fantastically unhinged, disturbingly intelligent performance by Noel is worthy of some accolade. Bristow is Noel.  There is no other way to put it. This genuinely does not feel like an actor playing a role. Bristow gets just the right amount of emotion in every scene. From losing it completely in a “fine dining establishment” to ranting at a guitar-player, he nails every moment.

Strawberry Flavored Plastic has its share of lengthy monologues but they work so well because of their deliveries: Noel engages the audience, he utterly demands your attention. There are so many scenes worthy of mention but one stand-out would be the harrowing destruction of Noel as he comes to face to face with his past.

Normally you would hate a serial killer (and rightly so) but it is impossible not to feel for him. Many films try to explain a character’s motives and fail; here, we have a film which manages to draw an emotional connection with someone who should be disliked, even hated…but you find yourself almost understanding him. 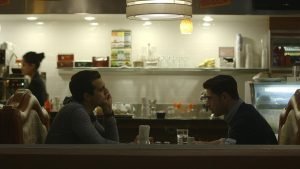 So much could be used as film-studies here: exploitation, personal gain, justice, right/wrong and motive are just some issues demanding multiple re-watches.

Credit must also be given for the interview scenes: set against a backdrop of books. Avid book-readers and eagle-eyed watchers should take in some of the titles. The inclusion of H. Howey’s “Wool” and “Shift” from his “Wool” trilogy towards the left of the screen is an interesting choice: do they represent themes mirrored here?  Are they just there randomly?

Just two of many questions arising from the film.

But therein lies a problem: does the film try to do too much? Some scenes, like the birthday celebration at night, could have been cut to provide a shorter run time, focusing on the important questions and plot-devices instead.

Intriguing, fascinating, character-driven, entertaining… an elaborate collection of words which only begin to describe Strawberry Flavored Plastic. It provides plenty of commentary and talking points for many future debates. The ending scenes surely deliver the finest of all questions: Just who really is the truly psychotic character in all of this?