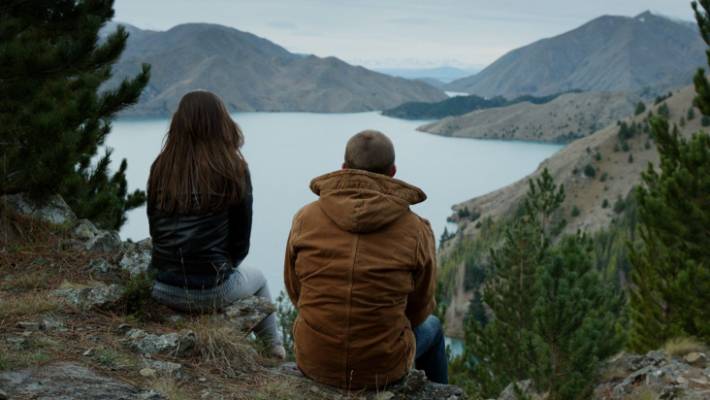 Writer-director Dustin Feneley’s impressive feature debut Stray is simply contemplative and resoundingly lyrical in representing two kinds of nature set against one another: pained human nature and the Great Outdoors joined at the emotional hip in the feeling of alienation. Dutifully, Feneley crafts a solidly probing character study of a couple of outsiders’ despair in a chilly landscape of scenic isolation that effectively works on the senses. Stray is soundly poetic and thought-provoking in its well-presented observation about severely disillusioned strangers coming together in unison of loss and love.

Aptly received as an exquisite indie arthouse drama fortified with blessed visuals, Stray marvelously pulls off the intimate elements of personalized strife for its two leading lost protagonists while providing an opulent New Zealand-based winterized mountainous playground for our outcast couple to bond in steady-made angst and adoration. Thoroughly insightful and armed with dysfunctional intrigue, Feneley’s resourceful scope of complicated existences in the backdrop of eye-popping natural scenery is something certainly hard to resist.

Basically, this absorbing showcase introduces the problematic pair of Jack and Grace (Kiernan Charnock and Arta Dobroshi) as they both look to ditch their blistering backstories within the cooling confines of the remote Central Orago. For Jack, he is a reserved tortured specimen finally getting released from prison courtesy of his previous attempt to kill his mature neighbor (Gerard Murphy) who killed JACK’S girlfriend in a hit-and-run scenario. Jack still maintains his disturbing undertones of hostility as he now has to consult with his parole officer (Joel Fili). A decision is made by Jack to take a long trek to the distant mountain cabin to chill out and figure out things. The far destination is not flashy by any means but at least it is a place where he can somewhat sort out his embedded anxieties.

In terms of Grace, she has her own distinctive demons to deal with at large. Recently released from the psychiatric ward the homeless Grace has no one or nowhere to particularly turn to for comfort. She is alone and delusional and only operating on a small supply of meds. Much like Jack’s way of thinking poor Grace figures on wandering off long-distance to a place wHere she can do some much-needed healing in the aftermath of her facility duration. Conveniently, Grace settles on hanging out at Jack’s cabin as her chosen resting spot. When Jack discovers Grace at his premises the two strays suddenly have each other regardless of their harboring any psychological scars that still haunt them intrinsically.

The troubled youthful couple in Stray is indicative of the incomplete lonely hearts roaming around in constant uncertainty. As the embittered Jack and Grace, both Charnock and Dobroshi are quietly compelling as the disenfranchised duo thrown away and left to their own destructive devices in a rocky setting that is as cold and dismissive as their outlook. Nevertheless, Feneley is skillful enough to convey the twosome’s crippling loneliness and bring them together through the completeness of breathtaking rough terrain. The wintry wilderness tenderizes this corrosive couple and actually gives them a sense of stability in an otherwise unpredictable world.

Stray is an elegant reminder that we all can get lost in the shuffle at some point in our lives–some more prominent than others. The consensus is that we all are capable of having a sordid past and needing to put some healthy distance apart from the hurt and ruination. The ability to move on and not be defined by one’s traumatic tendencies from yesteryear certainly makes Feneley’s fable of the walking wounded an enlightening take to cherish at heart.