Stray Dogs is a punishing, slow-moving, non-narrative depiction of the lives, such as they are, of a family, such as it is, of very marginal people living on the fringes of Taipei society. As Variety critic Guy Lodge put it when he saw the film at Venice, this film “will be adored by his hardcore devotees and precisely no one else.” 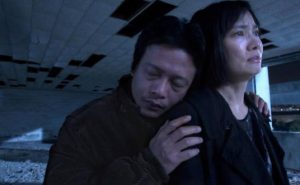 There are long takes, sometimes up to ten minutes. In one, a woman holding a shopping bag and a flashlight stands staring at a mural in an abandoned building, a landscape with rocks, for many minutes. Then she squats, relieves herself, and moves off, stage right.

Stray Dogs shows a man who works as a billboard carrier in busy intersections, often in heavy rain. He spends the meagre earnings from this on food, drinks, and smokes. His two kids seem to survive during the daytime by eating food samples given out at large supermarkets. He takes care of them at night, when they sleep in a space in a warehouse, or something. Early on a woman has been seen combing her hair, while two kids slept. Commentators believe two other actresses may be used as stand-ins for this same woman, who may be the mother. The woman feeds some dogs, hence the double meaning of the title.

Much attention is given to eating, sleeping, and attending to the bodily functions. There is very little dialogue. Toward the end there is a reunion and a moment of affection. Settings are urban, industrial, and impersonal.

Tsai has always been odd and avoided narrative, but he began as a whimsical filmmaker with references to the French Nouvelle Vague (What Time Is It Now?), and had a feisty young alter ego in his films. He has said in recent interviews that he is tired of making movies. Maybe he wants to make us as tired of watching them — at least his. 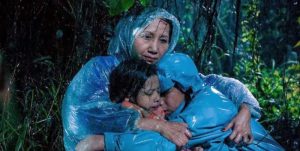 However, devotees of the non-narrative who also perhaps take this film as useful social commentary will see it quite differently. I quoted Guy Lodge, whose reaction is similar to mine. However the Telegrah’s critic writes, “Every shot of Stray Dogs has been built with utter formal mastery; every sequence exerts an almost telepathic grip.” The Playlist’s critic enthuses that “The filmmaking here is almost impossibly well-realised, right down to the evocative sound design, adding up to an fairly unforgettable experience.” Other sites have admiring dialogues about this film that assume its importance and artistic mastery. Hollywood Reporter notes, “Winner of the Grand Jury Prize in Venice, this despair-drenched portrait of a stray family on the disenfranchised fringes of Taipei society may be his sparest work yet, speaking to devotees but unlikely to lure many fresh converts. ” 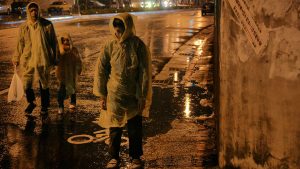 Stray Dogs/Jiao you debuted at Toronto and Venice. Screened for this review as part of the New York Film Festival at Lincoln Center, Sept. 2013.