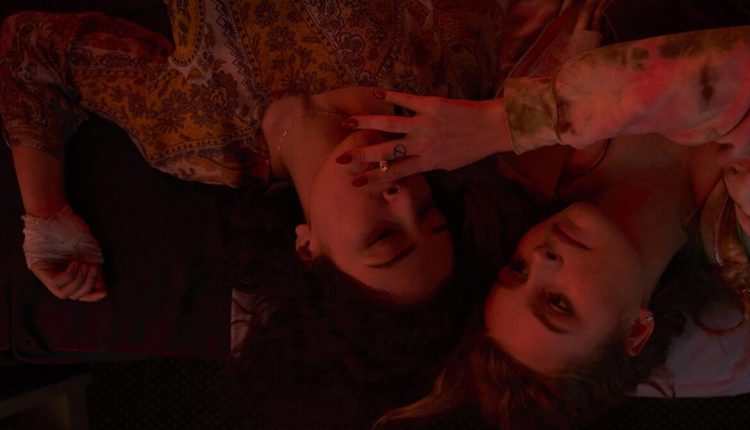 Ambitious female-bonding indie crime thrillers have a certain knack for putting forth noirs that feel rich in its dark, surreal spirit. Co-writer/director Sonejunhi Sinha’s Stray Dolls looks to spice up the genre with her featured devious divas embroiled in the scandalous mix of murder, sex, and drugs. Sinha, in addition to emphasizing the harried bond of her feminine tag team drenched in decadent turmoil, shines a revealing spotlight on blue-collar working class drudgery in all its puddles of purgatory.

Indeed, Stray Dolls echos the familiar beats of damaged womanhood caught up in the muck of sensationalistic sleaze. Occasionally uneven in its unctuous presentation of dour damsels-in-distress, Stray Dolls still maintains an indescribable aura about its colorful seediness endrenched in despair and desperation. Thankfully, Sinha has a stylish and stimulating eye for a moody and mundane estrogen crime thriller that challenges its problematic protagonists at every tumultuous turn regardless of its conventional concoction.

The film tells the twisty tale of two working women from different walks of life yet connected by a link of personal frustration and chaos. Riz (Geetanjali Thapa) had previously smuggled herself from India to settle in the United States. Hampered by a checkered past that included involvement in heavy gang activity in her homeland Riz had decided to start fresh and find solace working at an economy motel. After all, it is at least honest work as she anticipates moving forward in order to make a better life.

Riz’s co-worker Dallas (Olivia DeJonge) also has an erratic backstory as a runaway from a despicable mother. Both women are notably damaged by their complex history so the motel (which also serves as their home base) is the only comfort zone at the moment to help them heal psychologically in unison. As suggested strays out on the limb, Riz and Dallas must survive and maintain a focus that is clearly defined.

In particular, Riz owes her gratitude to motel owner Una (Cynthia Nixon from the Sex and the City notoriety) for hiring her despite her immigrant status. Nevertheless, Una has an unsettling energy to her that certainly does not make her the proper proprietor of the year. The reckless Una–while spouting off on how her property is sacred grounds for legitimacy–makes it her mission to mingle and take some profit from a local drug dealer (Samrat Chakrabati) operating his pushed poison from her business.

Una’s son Jimmy (Robert Aramayo), in the meanwhile, has a shady side deal with Dallas to promote the hustle of fostering an illegal prescription drug joint venture as they both feel rewarded by the monetary gain. So much for Dallas trying to go straight and narrow, huh? Gradually, both women gravitate towards the criminal cravings of taking a shortcut to their financial windfall rescue that requires they violate the boundaries of Una’s druggie partner’s cocaine stash. Not the brightest move for the denounced duo to make against this notorious narcotics-pushing character.

Still, the risk to be saddled in the treachery for Riz and Dallas is worth all the dangerous marbles at stake. The twosome have grand dreams to fulfill and time is of the essence to realize those elusive dreams. For Riz, the risk factor is definitely on the line as she hopes to pay the way for her family to leave India and reunite with her in the States. Dallas relishes using the ill-gotten gains to ensure ownership of a nail salon. Realistically, both women are embarking on an ill-advised adventure that can spell everlasting disaster within the confines of their Niagara Falls setting.

Straying away from doing what is right is a forgone conclusion. The housekeeping duties only pay peanuts so Una certainly is not worth making it easy for Riz and Dallas to become choir girls as they are expected to be content with changing beds and scrubbing toilets without so much an adequate income worth their back-breaking time.

Undoubtedly, Stay Dolls drains every nook and cranny of a grainy crime drama resting upon the jeopardized shoulders of defeated hot-looking heroines out for some long awaited redemption. The film’s holding ground–the Tides Plaza Motel in upstate New York–is a dreary playpen for the disenfranchised women that want more than the meager existence they were handed from Day One.

Riz and Dallas are the epitome of the leftover goods not earmarked for the so-called reachable American Dream. Sinha enthusiastically oversees a predictable potboiler that does not shed any undiscovered light on this low-key tale of feminine fury undermined in the wickedness of defiance and decadence. Resourcefully, Sinha does give serviceable breath to the brazen commentary involving the strife-ridden immigration experience in America. Otherwise, Stray Dolls is a taut crime thriller about the frayed protagonists and the vicious circle that encompasses the high expectations of achieving the ultimate goals in the midst of working class deterioration.