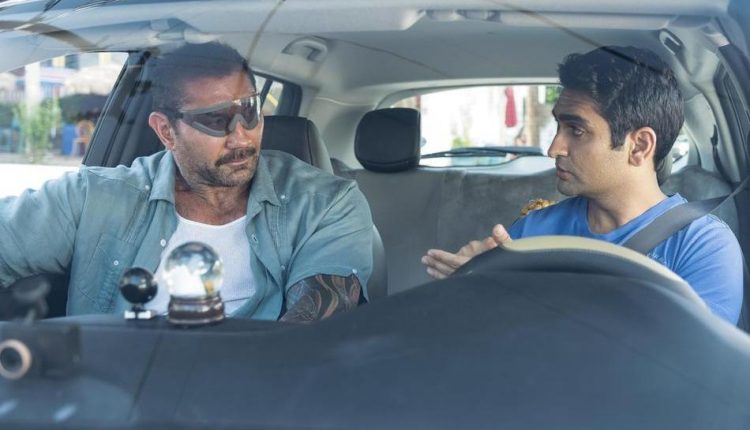 It was a matter of time before Hollywood came knocking at the door in presenting the off-the-cuff trials and tribulations of the transportation phenomenon known as the Uber driver. On that note, director Michael Dowse (“What If”, “Goon”) tries to give some outrageous mileage to the action-adventure-comedy Stuber. Quite frankly, Dowse’s transparent twitchy vehicle has all the cheeky charm of a roadblock during rush hour traffic. Needlessly frantic and foolish, Stuber is convincingly banal in its boisterous attempt to act as the fratboy flipside version of the suspenseful 2004’s Collateral where the Tom Cruise-Jamie Foxx tandem assumed the wheel of intrigue and insanity.

Dowse and screenwriter Tripper Clancy find the so-called impishness in pairing bulking ex-wrestler-turned-action star Dave Bautista (“Guardians of the Galaxy” movies) with the scrawny, rubber-faced stand-up comedian Kumail Nanjiani (“Men in Black International”, “It Started as a Joke”) in another tired and tedious mismatched buddy actioner that the audience has seen countless times before. The comedic formula is pretty much as expected in this regurgitated roguish romp where an odd couple is routinely engaged in pointless banter, silly-minded recklessness, arbitrary colorful car chases, exaggerated fight sequences, and elusive baddies about to receive some major payback. Indeed, the flaccid Stuber stays the course in its predictable premise to the point of wishing this put-upon Uber driver and his over-sized passenger would succumb to a flat tire.

Los Angeles-based affable Uber driver Stu (Nanjiani) is concerned about one thing–obtaining a five-star rating for his driving services. However, Stu’s goal in achieving this milestone comes at a costly price when he has to cater to the massive and muscular cop Vic (Bautista). Unfortunately, Vic is dependent upon Stu to chauffeur him around town due to recent eye surgery. Unable to drive and on the continued track to hunting down a ruthless drug lord, the muscular maniac Vic and timid Stu clash in typical cliched action movie fashion as they roam the streets for Vic’s notorious nemesis dutifully pushing poison.

Oh yeah…the calculating criminal in question on Vic’s redemption radar is the equally impressive fighting specimen in Indonesian action star Iko Uwais (“Triple Threat”, “Mile 22”). Vic has a score to settle with Uwais’s manipulative menace because his beloved partner (Karen Gillan from “Guardians of the Galaxy”) was killed by the dastardly hands of Uwais’s violent violator months earlier. Hence, Vic means business and he will stop it as nothing to seek revenge at the expense of Stu being saddled in the middle of the unwanted mayhem.

Interestingly, the only clever and witty footnote about Stuber is the playful meshing of Nanjiani’s character’s name “Stu” and his occupation in operating an Uber car (“Stuber”…get it?). Otherwise, Dowse’s Uber-themed action-comedy runs out of gas with its lazy showcasing of bickering, brutality bounciness, and any other recycled material that can be found in such retro comedy actioners from 48 Hours to Lethal Weapon. The chemistry between Nanjiani’s Stu and Bautista’s Vic is more of the hit-and-miss variety. Both actors have their shared moments of levity but the mediocre material practically undermines whatever frivolous spark was ignited by the two quirky leads.

What is most disappointing is the wasted usage of Uwais’s talent and showmanship as an acrobatic grappler. Uwais, whose pouncing prowess in cinema has been shown in animated wonderment with such eye-popping flicks as The Raid, is strapped in clunky confrontations with Bautista’s Vic in sluggish fight scenes way too underwhelming for both charismatic performers known for their vibrant physicality away from the cinematic cameras as well. The supporting players such as Betty Gilpin’s love interest for the loose cannon Vic seem to get lost in the nonsensical shuffle. The jokes fall flat and the cartoonish violence wears out its welcome.

When it comes to the simplistic Stu one might consider not taking a backseat to this ridiculous ride not worth the tepid travelling arrangements.