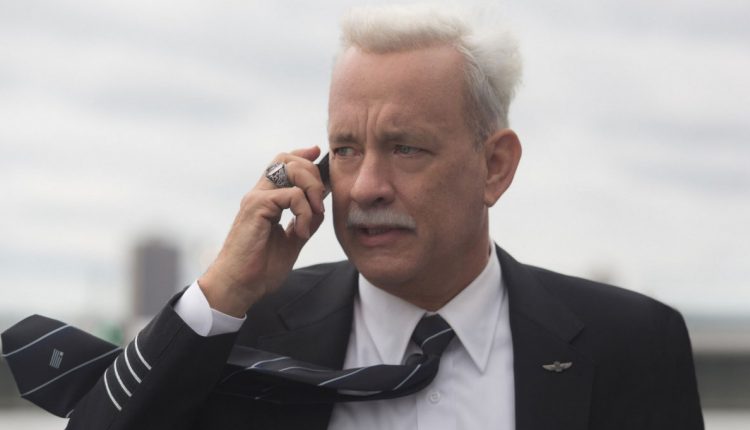 Typically Clint is doing good, straightforward, old fashioned filmmaking in his new movie Sully, whose title itself signals the mood: simplicity. The subject is an old fashioned hero, the pilot, Chesley Sullenberger, nickname “Sully.” He is forever known for “the miracle on the Hudson,” the emergency water landing he executed of US Airways Flight 1549 in the Hudson River off Manhattan, NYC, after the plane was disabled by striking a flock of Canadian geese during its initial climb out of LaGuardia Airport on January 15, 2009. All of the 155 passengers and crew aboard the aircraft survived. Hence the magic number, “155,” which says it all.

This is a simple story – even if chronologically the telling of it is not so simple – and it’s the kind of story where the trick is not to get in the way. That, Clint Eastwood knows how to do.

Playing Sully is Hollywood’s go-to man for tried and true, Tom Hanks. And Hanks just keeps getting better at that, tried-er and truer. He was the brave captain of the container ship hijacked by Somalis in Paul Greenglass’s 2014 Captain Phillips, and last year he was Jim Donovan, the heroic New York insurance lawyer who negotiated the Rudolf Abel-Gary Powers exchange in East Germany in the cold February of 1962, in Stephen Spielberg’s entertaining Bridge of Spies costarring Mark Rylance (who won an Oscar). Spielberg’s movie is a true story that’s also a rich John Le Carré-esque espionage thriller. Sully has a less complicated story to tell and both of those two other movies are 40 minutes longer.

Sully  simply dwells on its one big extraordinary event. In fact, Sullenberger says he has flown thousands of flights, but he will be judged on about four minutes – when he made the fateful decision and staged the remarkable crash landing in the water. This film hasn’t got Mark Rylance, or a character as fascinating and complex as the arch spy Rudolf Abel as a counterpoint to its true-blue Tom Hanks character. It’s just got Jeff Skiles, the copilot, who needed only to go through his second-in-command motions and not panic, and he’s played by Aaron Eckhart with a big mustache that almost steals his act from him. Eckhart is a strong physical presence, but a stiff actor.

Isn’t Hanks stiff too? Isn’t stiffness part of what he does? In the current role, he almost seems to be quietly imploding. Sully’s job, and he does it, once the landing and rescue are done, is to keep quiet except when he absolutely must speak. He is more than he does. The doing is done. Tom Hanks’s performances can seem rather on the flat side. He hasn’t got James Stewart’s edge of folksy charm. But he’s extremely good at embodying goodness and heroism. His performance feels honest and true to the real Chesley Sullenberger whom viewers glimpse in actual footage that runs at the end of Sully, and whom Hanks does a good job of physically resembling.

The action almost feels stuck in time. Everything revolves around those few minutes of the bird strike, the realisation that the engines were disabled, the quick landing, the rescue, which end notes say was executed by coast guard and police in 24 minutes. Sully and Skiles can’t go to their families yet, because there’s a big investigation to be done; they have to stay at a hotel. But the thing is they’re in shock.

That’s how the film begins, and with a staging of a small initial hearing before reps of the National Transportation Safety Board. To our shock, while the media all over the world are trumpeting Sully’s heroism and dazzling accomplishment, the authorities are dubious. Knowing that water landings are normally suicidal and that there were two landing fields as little as seven miles away, they question whether Sully made the right decision. The rest of the film will hover over this issue. According to Hollywood Reporter, National Transportation Safety Board authorities have complained they’re misrepresented in the film. But the story needs villains, and the NTSB get the job. Without the doubt, there would be no story, only hagiography. And because this doubt comes at us so early, Eastwood succeeds in making us buy into it.

Eventually, the event is recreated in all its detail. If you don’t remember, we’re reminded that this happened in winter, and the waters of the Hudson were so cold that the passengers wouldn’t have lived very long foundering in them. They also had to get out of the plane pretty quick as it filled up with that freezing water, and Sully supervises that, and is the last to leave.

But while it’s important for us to have all this in our minds, the focus is on other moments, private and public. There are the anxious and awkward phone exchanges between Sully and his anxious wife (Laura Linney). His quiet exchanges with Jeff Skiles. People keep coming up and hugging him. He goes into a bar, and he’s on the TV screen, and instantly recognised. The barman has already invented a new drink named after him. Try to get your head around that. The public event is the full scale hearing that’s staged a day or so later, or so it seems (time is telescoped), with Jeff and Sully confronted with a series of simulations. They are aimed to show that they could have taken the plane back to LaGuardia or nearby Teterboro Airport.

In the end, the core of Clint Eastwood’s movie is simulations of simulations. But this works. Ultimately Sully is an elaborately staged movie whose aim is not to tell a story but to communicate a feeling, about being brave, thinking fast under pressure, and trusting your decisions. It’s about a fight between humans and their machines, man and the computer. They are collaborators: but which one is in charge? The old fashioned message is that the human being still knows best.

Sully doesn’t have an elaborate story to tell, but it leaves one feeling quite deeply moved. The way it dwells firmly on the nature and consequences of actions and the values behind them makes it arguably more complex and thought-provoking than Captain Phillips or Bridge of Spies. And it certainly has its thrilling moments too.