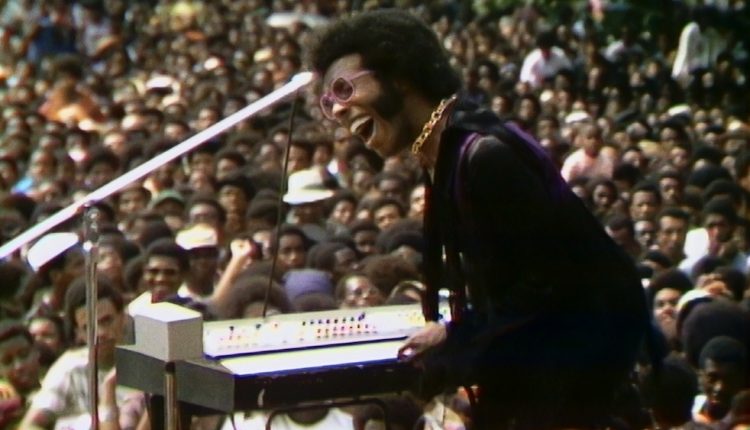 In 1969, a culturally significant music festival took place in the state of New York. Attracting an audience of 400,000 people, Woodstock became one of the biggest festivals in the 1960s and marked a turning point in popular music. However, another music festival was taking place in New York, which celebrated African-American culture. Despite hosting some of the biggest names in soul music, the event faded into history – until now.

Directed by Khalib ‘Questlove‘ Thompson, the award-winning documentary Summer of Soul (…Or, When the Revolution Could Not Be Televised) explores the 1969 Harlem Cultural Festival, which comprised a series of concerts taking place over several weekends, and the obscurity of the event.

When the documentary begins, there is a huge crowd in Mount Morris Park, Harlem, in the summer of 1969. Despite the sweltering heat, the crowd is quivering with excitement with a particular name being chanted amid the spectators. When the performer appears on the stage, the fever is justified as it is none other than Stevie Wonder. Sitting comfortably behind the drums, he performs a frenetic yet rarely seen solo, which accompanies a melee of archive footage that acutely sets the documentary’s tone.

In 1968, the assassination of civil rights activist Martin Luther King Jr. led to a series of riots that marked ‘the greatest wave of social unrest’ in the country and fortified the Black Power movement. Along with the assassinations of Malcolm X and Robert F. Kennedy, as well as the longstanding racial tension within the US, the country’s social climate was a boiling pot of unease. Although the roots of the event aren’t clearly disclosed, the festival marked a time for African-Americans to come together.

From the outset, the Harlem Cultural Festival is not like most festivals. Spectators have beaming smiles or children on their shoulders and are even watching from trees. There are also no mosh-pits, fights or tension – instead, it is a huge street party with lots of soul food and music to boot, not to mention members of the Black Panther Party as security. The event itself is a celebration of African-American culture, which is driven through its eclectic variety of music such as blues, jazz, soul, African and even Latin music to highlight social diversity through an array of talent.

Its roster not only highlights genre artists but also now-established names in music that not includes Stevie Wonder but Sly and the Family Stone, Nina Simone and Gladys Knight and the Pips. Looking back, it is an achievement to attract talent who were breaking out into mainstream media, a previously impossible feat for African-American artists, but their reception and pride in their performances highlighted that this was not just professional – this was personal. One particular performance that displays the festival’s significance involves Mavis Staple of the Staple Sisters as she duets with her idol Mahalia Jackson. As the two gospel singers share verses during the overwhelming heat, their voices soar over the crowd like they are singing to the heavens. It is a rare moment but echoes what the Harlem Cultural Festival represented: an event that stemmed from pride, diversity and unity. Even the Apollo 11 Moon-landing mission doesn’t sway the attention of local residents, who’d prefer the media to highlight a culturally significant event (namely, the festival) rather than something that was taking government funds away from low-income households.

In his first film, Questlove impressively balances attendee interviews with beautifully restored archive footage of both the artists and news snippets. Comprising spectators and artists, the interviewees fondly reminisce on the event and watch the festival back with tears and smiles. Coupled with the footage of their performances, there is a heady sense of nostalgia and fulfilment in being part of such a rare and significant event. However, Questlove doesn’t allow the audience to forget why they are there as news snippets scattered throughout serve as timely reminders of the social injustice that continues to plague American society.

By the time the credits roll, there is a sense of frustration to have footage of such a prominent event be effectively buried from audiences as it is a heady slice of musical education. While Woodstock became the stuff of legend, the Harlem Cultural Festival faded into obscurity because of a lack of subsequent media interest. Now, nearly 40 years later, it deserves its turn in the sun.

A beautiful explosion of music, unity and identity that isn’t overshadowed by its political message, Summer of Soul is captivating.

Summer of Soul will be released in cinemas across the UK and Ireland on 16th July, and exclusively on Star on Disney+ on 30th July.