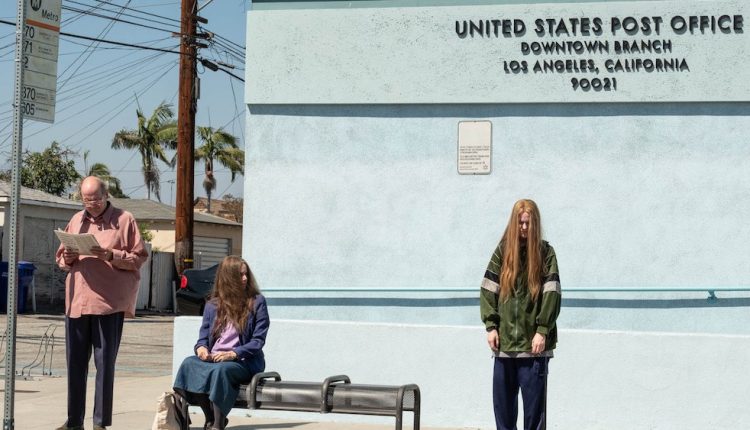 Director Miranda July takes on family connection in the surreal, surprisingly sweet Kajillionaire, which premiered at the 2020 Sundance Film Festival.

Old Dolio (Evan Rachel Wood, unrecognisable from her Westworld role) spent 26 years learning the art of the hustle from her con artist parents Theresa and Robert (Debra Winger and Richard Jenkins). The stable, albeit eccentric, family dynamic is upset by lively newcomer Melanie (Gina Rodriguez). Together, the unlikely quartet scheme to make $1,500 for back rent. The result is a meditation on the nature of family, identity, and love.

The film opens at a bus stop in front of a Los Angeles post office. The father, the mother, and the grown daughter wait, presumably for a bus, which comes and goes with them unmoved. Both mother and daughter wear oversized clothes and the same unbrushed wall of hair down to their waists, obscuring most of each of their faces. The sun-bleached tableau is interrupted by the parents bickering back and forth on when Old Dolio should ‘go’. Throughout, Old Dolio stands silently hunched. Eventually, Old Dolio launches a parkour-like entrance into the post office to avoid security cameras. Comical to watch, it introduces the central tension of how the parents treat her as a tool in their hustle vs. a person with her own need for attention and affection.

When Old Dolio speaks, her voice reinforces her discomfort interacting with others. She speaks haltingly in a deep register. Initially distracting for those accustomed to Wood’s other performances, the distraction is quickly forgotten as it so naturally fits the character.

Enter Melanie, who gives Old Dolio a glimpse of affection. Melanie slides comfortably into the role of daughter, but unlike Old Dolio, she prompts enthusiasm from the parents. However, Melanie focuses more on Old Dolio. That chemistry between Melanie and Old Dolio carries the movie, bearing the weight of layered emotions from each character. In less experienced hands, it could have become a heavy-handed caricature, but instead, it believably evolves from initial glances through its well-earned climax.

Kajillionaire benefits from the disciplined use of surrealism. The family struggles to stay ahead of toxic pink foam that regularly floods their low-rent living space, and earthquakes punctuate shifting ground beneath the Old Dolio’s reality. Used sparingly, the surreal details amplify rather than distract. Ultimately, Kajillionaire leaves viewers considering the nature of their relationships.