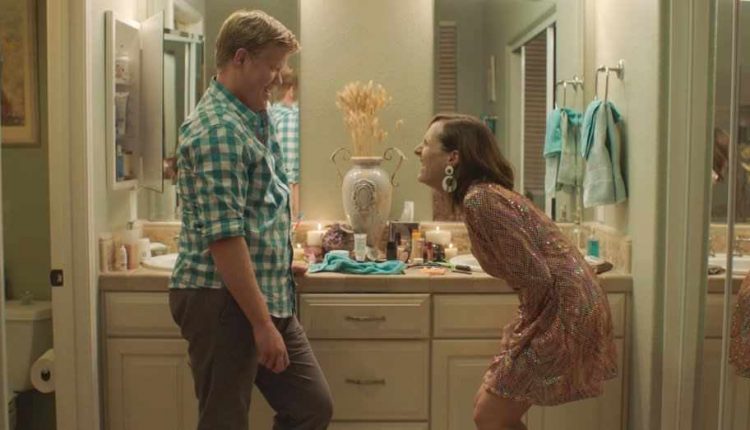 By Katie Smith-Wong On Jun 3, 2016
0
Share
As an Emmy-nominated supervising writer for Saturday Night Live, Chris Kelly can deliver on laughs.  However, for his debut feature as director and screenwriter, he has gone down a more emotional route.
Other People focuses on struggling comedy writer David (Jesse Plemons), who has just broken up from his boyfriend and chosen to move back to Sacramento to care for his dying mother Joanne (Molly Shannon).  As the months go by, his career and personal difficulties become harder to deal with, forcing him to accept the inevitable.
Given Kelly’s impressive credentials, it seems strange to put a comedic twist on such a sensitive subject.  While the characters remain upbeat in more ways than one, they – like the script – fail to hide their mutual sorrow and inability to alienate Joanne’s pain.   As the film and timeline progresses, it is evident that the initial emotional support from family and friends begin to break down, leading to an increasingly bleak climax.
But Kelly solely focuses on David’s struggle, namely his inability to share his feelings with his family, as well as his lack of success.  Choosing to bury himself in his writing, he avoids any emotional connection with his younger sisters and especially his dad.  As a result,  Kelly rests its success on the protagonist rather than establish the emotional foundation to support the film.  Fortunately, Plemons portrays David with sensitivity and subtlety without wandering into douchebag territory.  Shannon is also great as the endearing Joanne, whose determination doesn’t relent nor deter from leading as normal a life as possible.
Kelly sporadically puts in small funny touches in his screenplay, which complements his natural, conventional direction.  While the comedic bits tend to play into David’s personal life, they momentarily uplift the feature but overall, it is not enough to raise the spirits of his character, nor this feature.