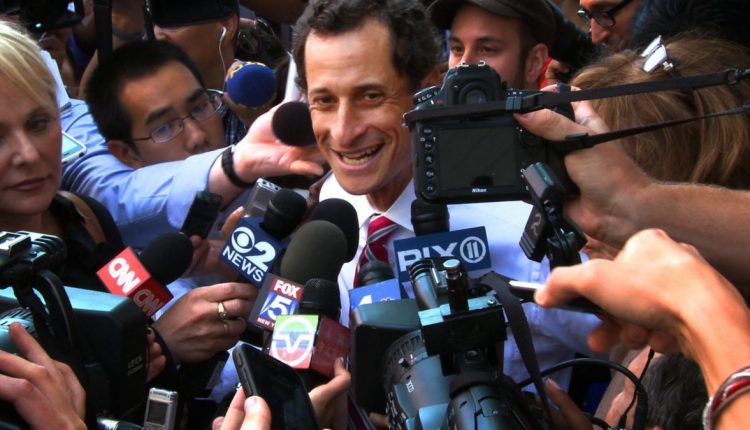 In 2011, New York congressman Anthony Weiner was involved in a scandal on Twitter involving a sexually explicit photos of himself.  Although he initially denied all involvement, the truth was revealed and he had to resign from Congress.

Directed by Josh Kriegman and Elyse Steinburg, the documentary Weiner follows the politician during his mayoral campaign in 2013, which was essentially ruined by another sexting scandal.

As a documentary, the audience expects to see multiple interviewees to provide a fully rounded feature.  Here, Weiner takes centre stage.  During candid personal interviews and behind-the-scenes footage of his campaign, he comes across as confrontational and determined.  His approach in addressing New York’s issues as part of his campaign starts strong, as he evidently and quickly wins favour with most of the city. However, his bold front swiftly dissipates when the second sexting scandal comes to light. He becomes moody and seemingly unwilling to address the situation, trying to use his political stance to win back the hearts of his prospective voters. As a result, the audience only sees the public perception of the situation, as if the filmmakers intentionally are leaving out a key detail in the documentary, rather than daring to expose the reality.

There is also a lack of in-depth interviews from his inner circle, closing off the emotional insight that audiences would want to watch. Instead, they have to settle with worldwide news coverage from that time to witness the effects of the scandal.  Not including his wife Huma Abedin as a interviewee feels like a big mistake; as political adviser to Hillary Clinton, she is familiar with the social backlash and what can work against a campaign.  Here, she is perceived as a mere background figure and through the constant media scrutinisation, a victim, which she unsuccessfully tries to dismiss.

Kriegman and Steinburg’s direction in capturing Weiner as the everyday man is effective, interweaving through New York’s bustling traffic and Weiner’s critics and fans.  Filming him, Huma and his staff throughout the scandal is creatively smart, and watching the drama enfold as election day draws closer is as exciting as political documentaries get.  The result is not a mayoral campaign that draws its strength from the candidate’s passion and willpower, but a public fall from grace that has an aura of schadenfreude.

Overall, Weiner is as close to real-time political chaos as audiences can get, though the filmmaker’s decision to play it safe doesn’t work in its favour.