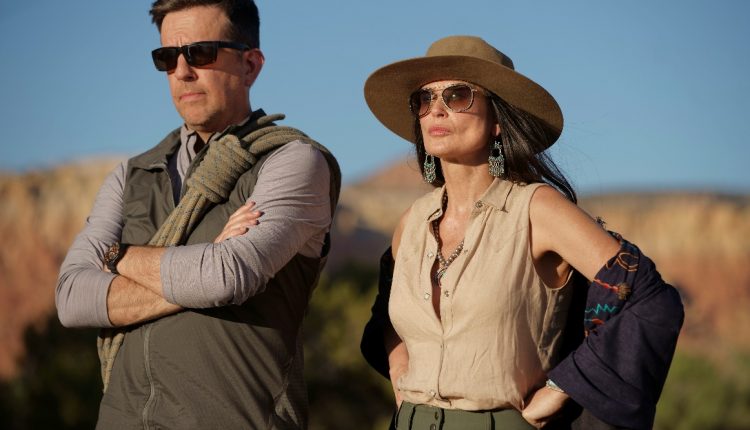 Directed by Creep‘s Patrick Brice, Corporate Animals stars an ensemble cast led by Lucy (Demi Moore) the CEO of a company that develop edible cutlery. She leads her employees on a team-building exercise in New Mexico, only to find themselves caved in from an earthquake. As the group contemplate their fate, their resentment towards Lucy, corporate truths and sexual tension threaten to spill over.

Not many people are willing to admit enjoying team-building exercises through work. Add an egotistical boss whose misplaced motivation just further antagonises her team and there is a recipe for chaos. However, the tension comes to a head far too quickly, so the anticipation for any subsequent confrontations dissipates before it can fully develop. In addition, the narrative is ultimately a scramble for survival with an arrogant antagonist in the way – a plot that is not only quite common but also simplistic.

Corporate Animals‘ roster of characters is also unoriginal. In addition to the egomaniac, there are the slackers (Dan Bakkedahl and Isiah Whitlock, Jr.), the timid one (Nasim Pedrad) and the over-enthusiastic intern (Callum Worthy). Not all of them bring much to the table, allowing Moore to steal the show with a delightfully bitchy performance. Deadpool‘s Karan Soni and Booksmart‘s Jessica Williams also offer solid performances as Lucy’s long-suffering assistants, whose optimism and decision to act highlight them as the proactive leaders they aspire to be.

As a horror comedy, the gore is effectively gratuitous and Sam Bain’s modern and sharp screenplay provide entertaining elements. In addition, the extremely short runtime makes Corporate Animals quite a compact film so audiences don’t have to dwell for too long before something happens.

Overall, Corporate Animals suffers from an imbalance of predictability and creativity. It has some hilarious moments but ultimately, it feels like a missed opportunity.