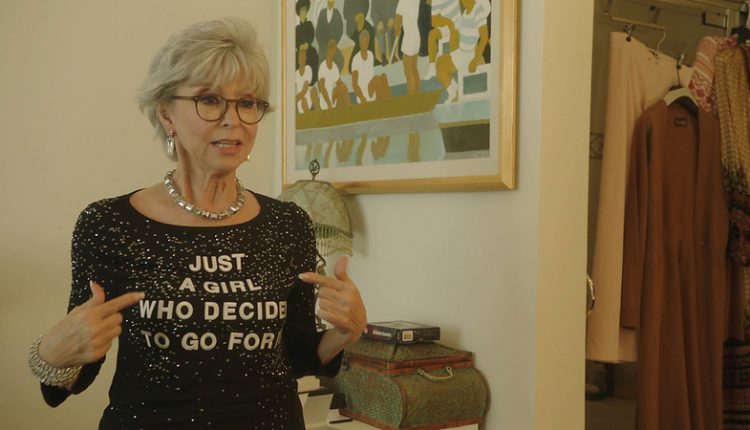 Many people know her as Anita from West Side Story. To others, she is Hilda from Singin’ in the Rain. However, those roles are the tip of the iceberg for a Puerto Rican actress whose Hollywood career spans over 70 years. Now, Rita Moreno is the subject of a new candid documentary by filmmaker Mariem Pérez Riera.

Rita Moreno: Just a Girl Who Decided to Go for It explores how she contended with discrimination and objectification in a challenging industry, as well as how she overcame personal demons.

Throughout the film, Moreno offers an honest albeit laidback account of her struggles adjusting to America. Her candour highlights an all-natural comfortability with the camera, especially when it comes to personal anecdotes as a groundbreaking performer. These include being on the same set as Gene Kelly to winning the unattainable EGOT (Emmy, Grammy, Oscar, Tony) – one of only 16 people to do so. But her achievements unveil a very sad and brutal truth; Moreno had to sacrifice her self-worth and independence to succeed.

Her memories take a dark turn when she reminisces being preyed on and objectified during the misogynist ‘Golden Age’ of Hollywood, along with being typecast or undergo blackface to portray ‘foreign’ characters. She also talks frankly about a sexual assault by her agent and her tumultuous relationship with Marlon Brando, which led to a suicide attempt following a failed abortion.

However, these traumatic experiences only seem to make her stronger. Refusing to hide her demons, Moreno shows a rare level of honesty and a sense of intimacy that intrigues audiences. In addition, Pérez Riera beautifully highlights her confidence in persevering in such a difficult industry while serving to inspire others.

Overall, Rita Moreno: Just a Girl Who Decided to Go for It is a direct, insightful and enlightening portrait of a woman who, despite the odds, pursued the American Dream – and is now winning in life.