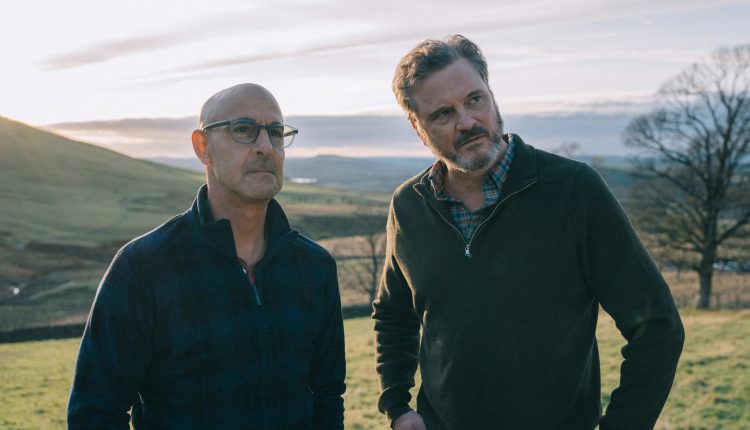 A supernova is the largest explosion that takes place in space. Scientists describe it as a star increasing greatly in brightness due to an explosion within. Beautiful and catastrophic, it’s an apt metaphor for Harry Macqueen’s newest film, named after this phenomena. Although it takes place in contemporary England rather than space, it still concerns a scenario that is simultaneously devastating and life-affirming. The results are nothing short of mesmerising.

Colin Firth and Stanley Tucci play Sam and Tusker, a married couple who have been together for over two decades. When we first meet them, they are setting out on a road trip together across the Lake District to visit friends and family. But there is clearly something off. It is revealed that Tusker was diagnosed with dementia two years prior, and both men are struggling to adjust as the disease starts to take hold. It is during this trip that their relationship is put to the test as revelations come to light.

At the core of Supernova is a poignant story on love and loss. Every romance and love story eventually ends with the finality of death, but when it comes for someone slowly, it makes the awareness of mortality all the more crushing. Tusker knows that he will eventually forget who his husband is, and struggles to reconcile with the pain he will put Sam through with this. Meanwhile, Sam stresses over the thought of watching the man he loves lose all recollection and thus, in a way, disappear. It is a lot of weight to bear for both men, and the film captures this heartbreak, anxiety, and fear to tell a tale on the lengths we go and sacrifices we make for those we love.

Informing the thematic strength of Supernova is a rich sense of history between Sam and Tusker. Their interactions carry anxious, even bitter, overtones at times, but we can feel the titanic love the two have for each other. Their exchanges are so natural that they seem able to read each other’s thoughts just through small movements and changes in body language. Because the events of the plot are so mundane, there is an authenticity to this world and those who occupy it that only enhance the emotion woven into the text and subtext. Macqueen’s screenplay lays this groundwork nicely, but Firth and Tucci take the material to even greater heights. Their chemistry is simply magnetic, and their individual performances are among the best of their careers. The tenderness and sincerity in their affections and fears for the future, and especially each other, is utterly addictive.

Even the surrounding filmmaking meshes well with the film’s themes and character work. The cinematography captures the lush colours and beauty of the Lake District splendidly. Yet there is a bleakness too, as if cinematographer Dick Pope is showcasing the marvels that Tusker will soon forget as nature takes its course at its most merciless. Chris Wyatt’s editing further heightens the visual splendour and melancholic feeling that can be gleaned from the men’s conversations, and Macqueen’s direction is both confident and astute, while remaining fervently empathetic for its characters and their plight.

It is this that allows the film to work so well. There is such an honesty to its craft that the emotion of each moment, be it of joy, excitement, or, more often, crippling denial, bargaining or grief, hits you like a train. The simultaneous selfishness and selflessness that Sam and Tusker wrestle with as they face the tolls and realisations of an impossible situation that no one can win is so heart-aching that cinemas will likely need to sell boxes of tissues alongside the popcorn. Macqueen understands and conveys the difficulty of the premise, and love’s steadfast ability to adapt, endure, and ultimately sacrifice, with such wonderful rapport that you will likely feel the tears coming on mere minutes into the story.

Film critic Roger Ebert famously called cinema “a machine for generating empathy”. Supernova fits this description wonderfully. It can be a tad overwritten at times, with the dialogue sometimes directly conveying the themes rather than sewing them into the story. Yet the earnest character work, compassionate direction, and gut-wrenching emotion driving the film more than make up for this. Stunningly filmed with tremendous performances, Supernova is a sensitive, spellbinding feature that celebrates the power of love, even in the face of unimaginable hardship. It will leave you crying with joy and sorrow, often at the same time.