Teen movies can be fun. Road movies can be fun. But I can’t think of too many teen road movies that end up being any good (though do feel free to let me know of any obvious titles I may have forgotten), and I certainly can’t think of any that are as good as The Sure Thing. The only major downside here is that the whole thing is far too predictable, but the same can be said of almost any other film of this ilk. The fact that it makes up for in sheer enjoyment what it lacks in originality is a big plus point. 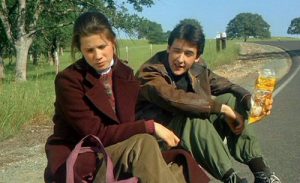 John Cusack stars as Walter ‘Gib’ Gibson in this highly enjoyable, albeit all-too-predictable, teen comedy that puts him alongside Daphne Zuniga as the two journey on a road trip to two very different destinations. Zuniga is heading to be with her partner (Jason, played by Boyd Gaines), while Cusack is answering a call from his friend, Lance (Anthony Edwards). Lance has a young woman (Nicollette Sheridan) who is keen to meet Gib. She’s heard all about him and likes what she’s heard. According to Lance, she is . . . . . . . . . . a sure thing. 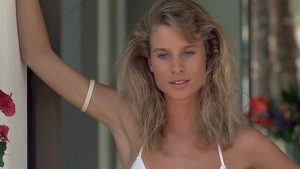 Directed by Rob Reiner, this is superior comedy fare that effortlessly keeps viewers entertained from start to finish, thanks to the script by Steve Bloom and Jonathan Roberts, and the performances from all involved. Cusack may not be too believable when he momentarily acts like a lunatic hitchhiker (see the movie and all will become clear), but he’s very funny. Which is all that matters at that moment.

Cusack and Zuniga work well as a central pairing, rubbing each other up the wrong way while also creating subtle changes in their personalities. And it’s great to see both characters get to have some fun, despite the fact that in the earlier scenes it’s clear that Zuniga is playing someone who doesn’t really let her hair down that often. The supporting cast is a solid mix, with no real standouts except a hilarious couple played by Tim Robbins and Lisa Jane Persky.

The Sure Thing was a kind of gateway film for me. It was one of many teen movies that I enjoyed in the 1980s, but it was probably the first movie that I watched that also fell into the road movie category. And it’s a rom-com, a type of film that I probably didn’t rush to see when I was a young, pre-pubescent boy. I’m happy that The Sure Thing, in its own small way, led me to many other movies I have since grown to love, and I’m happy that I’ve never been disappointed whenever I’ve revisited it.