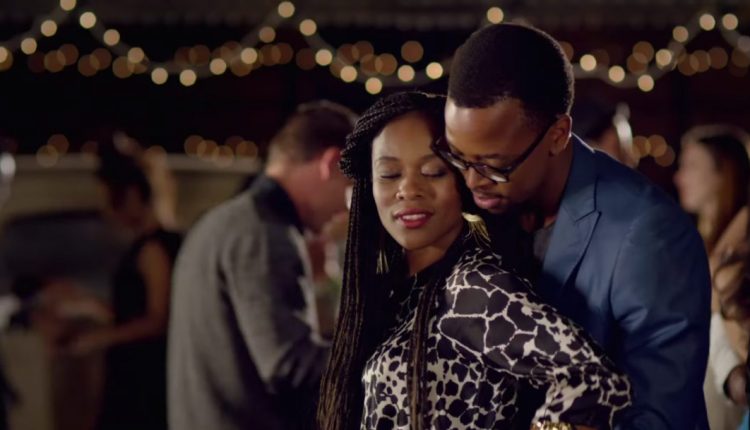 There’s boundless ambition in Tell Me Sweet Something’s protagonist as she boldly aims to tell the great African love story, an ambition completely at odds with a film closer to easy listening radio. It’s romantic comedy marinaded in enough soporific gentleness to bring down an elephant. While certainly kind of heart, Akin Omotoso’s latest directorial effort proves extremely heavy of foot, bolted together from assorted soap offcuts that can’t cover up the lack of both romance and comedy.

Moratiwa’s (Nomzamo Mbatha) aspiration kicks things off before turning sour very quickly. After a handful of elderly couples discuss relationships, animated credits tell of her early misadventures when she’s offered and then loses a multi-book deal. Now, burnt by an ex-lover who walked out for milk and never came back, she spends her time running a failing second hand bookstore safely out of harm’s way from romantic entanglements. That is until best friend Tshaka (Thishiwe Ziqubu) convinces her to come out clubbing, where predictably she meets Nat (Maps Maponyane), a pleasant male model desperate to be taken more seriously. After meeting so early, the rest of the film is spent watching Moratiwa’s relationship status swing back and forth as various problems get in the way of true love.

As simple as the plot is, it feels a lot messier. Diversions are hurled at the screen, anything from pregnant ex’s to money troubles, drunken partners, a distracting second romance between Tshaka and Nat’s best friend Gordon (Thomas Gumede), and even the occasional under-explored dip into racial politics. Each story rushes past without time to develop beyond an idle thought. When Nat’s ex turns up to ruin the party by announcing her pregnancy, there are only a few minutes of moping before everyone moves on. With so few moments of consistency, Tell Me Sweet Something never manages to head in one direction long enough to find that meaningful note it strives so hard to hit.

Instead, quality is substituted for quirks. Characters reel off numbered advice that also flashes on screen in bold text, giant posters wink alarmingly and inner monologues randomly occur sounding all too like everyone has stumbled through a black hole into the world of The Mighty Boosh. The tricks come thick and fast at a rate that belies the ponderous will they/won’t they nature of Moratiwa and Nat’s tepid love affair

As for the cast, well, apart from Thishiwe Ziqubu who’s consistently impressive, they give it the old college try. Everyone is enthusiastic in a rather infectious manner, always there with a big gesture or theatrical facial expression to mark any moment of importance, and plenty that matter not a jot. Subtlety is not exactly the order of the day, but it oddly works, playing out like a hammed up episode of Hollyoaks (if such a thing is even possible).

The repeated turns to cliché are also endearing more than annoying. A love montage sees the couple cycle around with inane smiles while smooth pop sounds in the background. Never afraid of the dramatic, when a lover leaves, the jilted partner wistfully watches the plane depart. Less interest is shown in Moratiwa’s writing career, frequently abandoned for relationship gossip, though there’s still time to dramatically give her manuscript to the wind in an overdone display of defeat.

Tell Me Something Sweet is a failure in most ways, operating more in the realm of pantomime than genuine romantic comedy. An energetic cast is the only thing it has in its favour. Thanks to them it’s vapid, forgettable but also strangely pleasant. Though even this is not so much saving grace as minor consolation.