Rural American towns: quiet, calm, secrets on the surface.  That is the notion most people have.  Sweet Virginia takes that notion and delves deeper into the looming darkness hidden behind the curtains, revealing a whole lot more.

The film opens with a bar scene: quite typical but things soon go wrong.  It is well past closing time and three friends are playing cards when in walks a customer who refuses to leave.  The explosive exit of the stranger (Christoper Abbot) startles the audience and leaves the atmosphere thick with violent tension.  He returns moments later with a gun; all three men are murdered and money stolen.  Was this just a revenge killing?  How did the stranger know about Mitchell’s personal life?  The film sets intrigue from this moment, imploring the audience to continue watching.

We meet Sam (Jon Bernthal) an ex-rodeo champion who now owns a motel named Sweet Virginia (a nostalgic impulse possibly) who’s imposing physique hides a hurt deep within; a troubled soul.  We do not learn much about Sam- just the essentials: a photo of a woman and child which he places face down, he is suffering early-onset Dementia and walks with a severe limp  but Jon Bernthal’s powerful performance wins the audience over, his character should be well-liked by all.

The stranger reappears, going by the name Elwood, booking a room at the Motel.  A place where people tend not to stay for too long, where their secrets are generally kept- Sam doesn’t appear to be the type to ask too many.  A scene between Elwood and Sam highlights the efficiency of Elwood’s career yet where he sorely lacks with social cues- he talks awkwardly, avoiding eye contact.  The performances of both Bernthal and Abbot boost the film immensely, adding a rawness that otherwise would have left the film as lonely as the characters themselves. 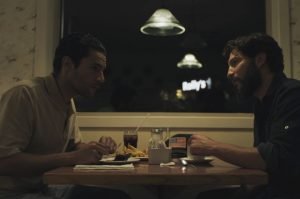 Many secrets and twists are played out across the entire film which leaves the audience guessing multiple times; none shall be revealed here.  There are scenes which do shock and surprise- which nowadays, is a rare thing to happen, such as the previously mentioned bar scene and a scene later in the film featuring Bernadette (Rosemarie DeWitt) showing an unseen strength.

The leading ladies (Imogen Poots and Rosemarie DeWitt) match their performances well, allowing otherwise forgettable stock characters to remain in the audience’s minds.  Poots’ face during one scene appears so naturally and realistically to portray emotion so powerful that you can not fail to find sympathy with her character.

Your typical noir thriller, this film is not: there are many subtle points and character developments which it urges the audience to think about further- how Sam’s earlier encounter with the tenant from Room 128 is so different to the final showdown epitomizes Sam’s ability to change.

However, while there is a story to the film, the plot does not seem to be quite so clear.  Perhaps the film tries to do too much which casts unnecessary shadow in an already darkened film.  It has been suggested that Sweet Virginia may continue to be debated for years to come about its qualities but equally, it could just fade away as a distant memory, like so many of people’s stories from the rural town it was set in.

Sweet Virginia could have rated much higher- generally it very watchable but the necessity for multiple re-watches because of the immense details which are scattered throughout the film means that instead of for pleasure, a second viewing is a must to get the full impact of the film.  Furthermore, while there are plenty of things to dwell on such as character motives, development or social commentary; the film doesn’t seem to give each enough screen time- in parts it feels a bit rushed.  Could it have done with an extra twenty…thirty minutes?  Probably.

Is it worth your time watching?  Yes.  It might not win any awards but Jamie M. Dagg has directed an interesting take on the genre.  One which when thought about, has plenty of commentary about the characters and setting.