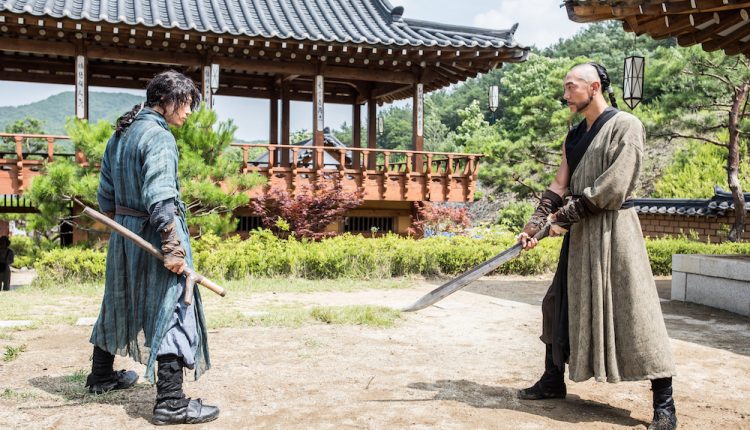 Written and directed by Choi Jae-hoon, The Swordsman stars Korean actor Jang Hyuk as the titular character. The film stars Hyuk as Tae-yul, a former soldier who is going blind due to an old injury. Tae-yul’s daughter Tae-ok (Kim Hyun-soo) tries to find him treatment for his eyes but when she is captured by merciless slave trader Gurutai (The Raid‘s Joe Taslim), Tae-yul is forced to fight to rescue her.

With its story adopting the familiar father-rescues-daughter trope, its straightforward plot is compromised by its political and historical background. Based on historical events, the plot is notably set amid the Ming-Qing transition in China, unfortunately, there is a lack of context and background regarding the particular period to help lay the foundation for viewers. Therefore, Choi’s screenplay restricts the scale of the conflict and giving the impression that China’s history is irrelevant to the story (especially as the film is in Korean), as well as confusing viewers with dithering political discussions amid certain characters.

Adopting a non-linear narrative, The Swordsman tries to form a more comprehensive story using flashbacks into Tae-yul’s life prior to becoming a soldier. However, their sporadic inclusion ultimately feels unnecessary as they feel too much like an afterthought. The uneven tone of the narrative and screenplay also leaves more interesting plot elements and supporting characters such as Tae-ok and committed soldier Min Seung-ho (Jun Man-Sir) underdeveloped. Even the sinister Gurutai is ironically left half-baked, as he readily uses his political influence as a means of intimidation but the extent of it is not fully disclosed.

Therefore, the success of The Swordsman lies with protagonist Tae-yul. A former soldier who has suppressed his sword skills, he frustrates the concerned Tae-ok with his stubbornness regarding his growing loss of sight and the mundane seclusion. As a result, he unwittingly drives her somewhat materialistic ambitions so it is no surprise that she jumps at the chance of a better, more privileged life to secure his treatment.

When she ends up in the wrong place at the wrong time, this is where The Swordman shines. Through Hyuk’s composed performance, Tae-yul shows – despite his sight issues – that he is unafraid to throw down, showing an unparalleled level of skill and calmness against his brash and arrogant opponents. Accompanied by clever camerawork, the intricate swordplay is well executed and relentlessly violent, with scenes range from a one-versus-many in a creatively dizzying fight sequence to a tense confrontation between Tae-yul and Gurutai. As a result, they easily become the film’s standout scenes.

Overall, The Swordsman suffers from a lack of consistency but its action scenes save it from being an incomprehensible mess.

Trinity CineAsia presents The Swordsman on DVD and Digital on 17th May and Blu-ray from 24th May.