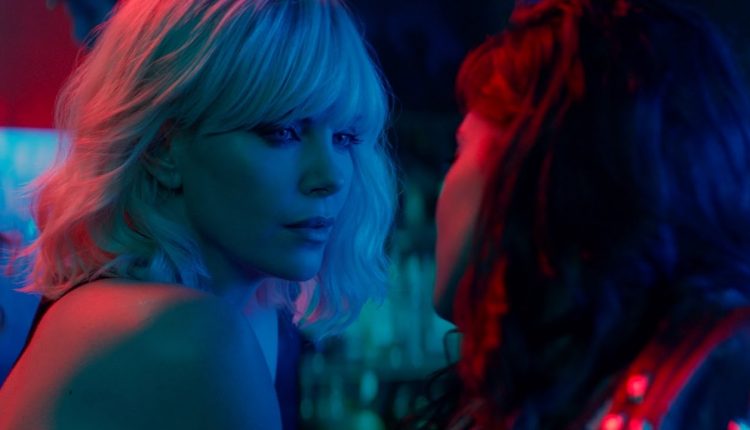 In a breathless opening sequence, an inappropriately dressed man dashes around the streets of Berlin only to get repeatedly run over and then shot by a KGB agent, all while “Blue Monday” roars out. Atomic Blonde is not out to cause any confusion: it starts the way it means to continue, delivering non-stop madness and a hell of a lot of fighting.

Directed by David Leitch and shot by Jonathan Sela, both of whom worked on John Wick, you could be forgiven for initially thinking this is an extension of Keanu Reeves’ franchise. There are three main differences: the action moves from gangland revenge to Cold War spy thriller, violence is mostly conducted hand-to-hand, and Reeves is replaced by Charlize Theron.

She plays Lorraine Broughton, a British intelligence agent sent to Berlin just before the wall falls. She’s tasked with recovering a list of agents and unmasking a traitor, but first she must meet up with James McAvoy’s increasingly erratic agent David Percival. Once the star pupil of the MI6 boss, he appears to have turned feral, morphing into the iron curtain’s Colonel Kurtz.

As Theron smashes her way through rivals in a bid to help a defector (Eddie Marsan) who might hold the key to the list, a soundtrack packed full of ‘80s classics rains down on the action. It’s incredibly cool, helped by constant neon lighting that makes the entire film feel as if it were shot in a nightclub. Leitch throws in dripping graffiti graphics and irreverent titles along the way to enhance the mood.

It’s best not to look too deeply at the plot while all the visual madness unfolds. Adapted from Antony Johnston’s 2012 graphic novel, double-crossing, paranoia and endless bluffing fail to mask the general stupidity of the story. It’s a whole bunch of spy clichés thrown at the screen in the hope something sticks. Who cares when Theron destroying a steady stream of Communist agents proves so entertaining though.

The violence is bone-crunchingly brutal, everyone taking more than their share of knocks. It’s so draining the combatants often have nothing less. One man simply topples backwards down a flight of stairs after fatigue and a bad beating render him incapable of continuing. Even Lorraine reaches limits, stumbling to the ground after throwing punches.

In amongst exhilarating fight scenes and nonsense plot developments, a degree of unpleasantness seeps in. While it’s great to have a stylish action thriller fronted by a woman, it would have been better had Atomic Blonde managed to keep from fetishising her. Theron is glimpsed naked in the bath and appears in her lingerie more than is strictly necessary. She’s even given a female lover in the shape of Sofia Boutella’s French intelligence agent, a move that seems to exist solely to have them cavorting around in bed together.

It adds a seedy element into an otherwise entertaining experience. Atomic Blonde is not exactly John Wick, but it’s playing around in the same sandpit. While that may put a few people off, anyone seeking an adrenaline pumping experience need look no further.