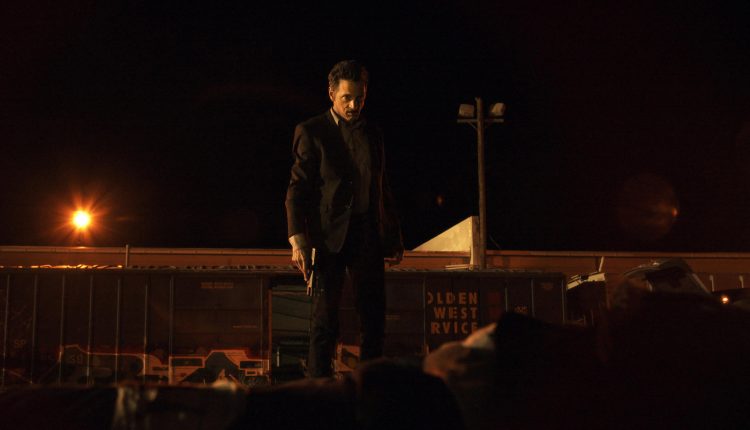 As President Trump likes to make abundantly clear, inner-cities are dangerous, crime-riddled places. However, the latest feature from the Nelms brothers (Eshom and Ian) suggests urban centres don’t have a monopoly on law-breaking. It’s in a small town (hence the title) where John Hawkes’ broken down ex-cop finds himself dragged into a grimly funny murder investigation.

Small Town Crime is a murder mystery, but it’s one packed with moments of dark comedy. The opening sequence, showing a hungover Mike Kendall (Hawkes) pumping iron by the car he crashed through his own fence, establishes his credentials. He’s unemployed, drinks far too much, and has no one beyond his adopted sister Kelly (Octavia Spencer) and her husband (Anthony Anderson). He also desperately wants back the badge that was taken from him after a fatal incident on duty, revealed gradually in flashbacks.

Luckily for Mike, and less so for everyone else involved, he finds the battered body of a prostitute by the side of the road and sinks deep into the case, clinging to it like a life raft even as his old police colleagues try to push him off and deal with it themselves.

A generic crime thriller lies underneath all the additions, but thankfully they prove entertaining enough to cover over what amounts to investigation by numbers. Much of the success of the film is down to Hawkes. As both a gifted comic and dramatic actor, he’s able to bridge the gap between murder investigating and a lower-key version of Shane Black style comedy. Mike is an engaging mess, stumbling about from one misadventure to the next, just about managing to keep his head above water. He even creates a fake PI to continue the investigation, somehow impressing the grandfather (Robert Forster) of the victim.

Forster is part of a generally strong supporting cast. He has his moments, as does Clifton Collins Jr. as an extravagant purple impala driving pimp. Anderson’s brother-in-law gets time too. The inclusion of Spencer is something of a mystery though, as she’s rarely used and never given much to do when she does appear. With her credentials, it seems an odd choice.

Inevitably, as the case progresses the story heads towards a climatic finale. Complete with odd-couple accomplices, Mike arrives to see everything devolve into a gunfight. Predictable as it undoubtedly is, the action is at least well-shot and relatively engaging. Much like the rest of Small Town Crime really. It’s disposable entertainment, but not before doing its fair-share of entertaining.