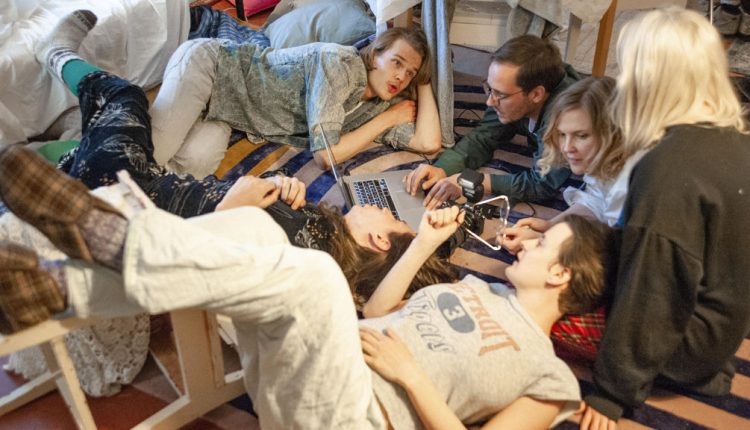 Fucking With Nobody is directed and co-written by Hannaleena Hauru, who also stars in the lead role. Haura plays Hanna, a female director who is a loser in love. After being passed over from a directorial job, she undertakes a fake romance on Instagram with her gay friend Ekku (Samuel Kujala). This ‘relationship’ starts to gain influence and popularity, which drastically changes Hanna’s life.

Throughout the film, Hanna exudes her artistic direction as a filmmaker, directing how her ‘romance’ with Ekku is captured. But her lofty ambitions begin to cloud her judgement regarding the true intimacy of relationships, seemingly disregarding her friends’ goals for the project to favour her own, as well as using personal memories with her ex Lasse (Lasse Poser). Whether this is to compensate for her own lack of romance or exude her bitterness in being fired, the lines between reality and fantasy become blurred in the narrative. By the time we reach the third act, the pretentious direction derails the story and dialogue in and we soon lose track of what we are watching – and wonder whom we are supposed to support.

However, there are two people in this relationship and unfortunately, aspiring actor Ekku is an equally self-seeking character. Despite having a boyfriend, he jumps at the chance to take part in this Insta-romance as Hanna’s handsome new boyfriend. This new exposure opens him to a wider group of filmmakers that will further his career. This causes him to drift apart from his partner Ara (Pietro Wikström), who slowly becomes increasingly jealous of Ekku and Hanna’s chemistry and results in him asking the real question of the film: “what the fuck is going on between you two?”.

This subsequent confusion amid Fucking With Nobody is detrimental towards the film’s initial promise. Proposed by Hanna’s friends, the paraody romance offers a commentary platform for the power of ‘influencers’ and social media – notably how people see others and vice-versa. The effect of this relationship is almost instantaneous as Hanna becomes the object of office gossip overnight, as her colleagues are surprised and intrigued by the surprisingly intimate post of a guy whom they have never heard of. It also allows Hanna to highlight her skills as a female filmmaker, especially as her dream director job of a female-driven film is given by her rival Christian. So for this narrative to become lost is a shame – by the time of Fucking With Nobody‘s strange climax, we are left wondering what we just watched.

Overall, Fucking With Nobody ultimately becomes lost in its pretentious nature, as it turns an intriguing social experiment into a somewhat shamelessly self-serving artistic project.