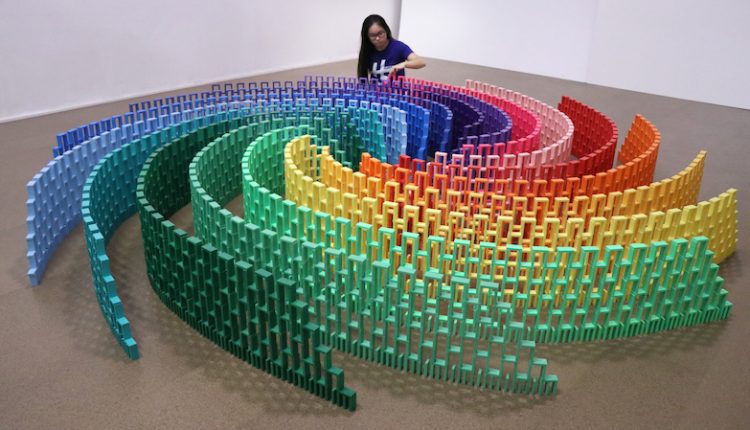 If someone mentions the name ‘Lily Hevesh’, chances are you would have seen at least one of her works. With a YouTube channel exceeding three million subscribers, Hevesh is a twenty-something Asian-American domino artist. Her work has attracted over a billion views and was featured in the 2016 Will Smith drama Collateral Beauty. Produced by Kelly Marie Tran and directed by The World Before Your Feet director Jeremy Workman, Lily Topples the World follows Hevesh’s journey from leaving school to becoming an entrepreneur while proving she is the world’s most prominent female domino artist.

When we first meet Hevesh, she comes across as a typical university student. She exudes a humility when it comes to her achievements, so much so that her classmates and close friends had no idea of her fame until they stumble upon her video being shared by Hugh Jackman. In fact, Havesh’s modesty establishes a groundedness to the documentary while dazzling the audience with the impact of her visually dazzling work.

As to be expected, the majority of Lily Topples the World focuses on Hevesh’s work in domino artistry. Filmed over three years, we see her drop out of university to pursue domino artistry full-time. While her passion takes her around the world, she makes a steady climb from giving demonstrations and classes to high-profile collaborations with celebrities. With domino toppling being such a niche field, she not only becomes a prominent figure amid the video content creator community but forms close friendships with other topplers – a social aspect that feels restricted due to her cultural identity.

Adopted as a baby, Hevesh was raised amid a Caucasian American family in a mostly Caucasian area with no exposure to Chinese culture. As a result, she is mostly unfamiliar with her biological history and even the language, which gives the impression that she doesn’t ‘belong’ anywhere. Among the melee of interviews, she lightly comments at one point: “I didn’t know how to be me because I didn’t know who I was.” It is a simple statement that summarises her struggle while bringing a sentimentality to this coming-of-age narrative.

Throughout the documentary, Workman reiterates that Hevesh is the star. She is the one surveying these ambitious displays, forming relationships with others, and directs the camerawork regarding the toppling. She even sits at the head of a table while meeting with a toy manufacturer regarding her own brand of dominos. Despite her young age, her firmness and direction highlight her experience and knowledge but her personability reminds audiences of her groundedness, making her a relatable role model for Generation Z.

Given its significance in Hevesh’s career, Lily Topples the World does briefly touches on the impact of YouTube as a platform and praises its immediacy in publishing diverse content. However, its darker side, which includes trolling and negative comments, isn’t deeply investigated. With little to support otherwise, we are left to assume that it is the right path for Hevesh’s passion and career.

Overall, Lily Topples the World is a fascinating insight into a creative young woman but her modesty is overshadowed by the scale and ambition of her domino work.