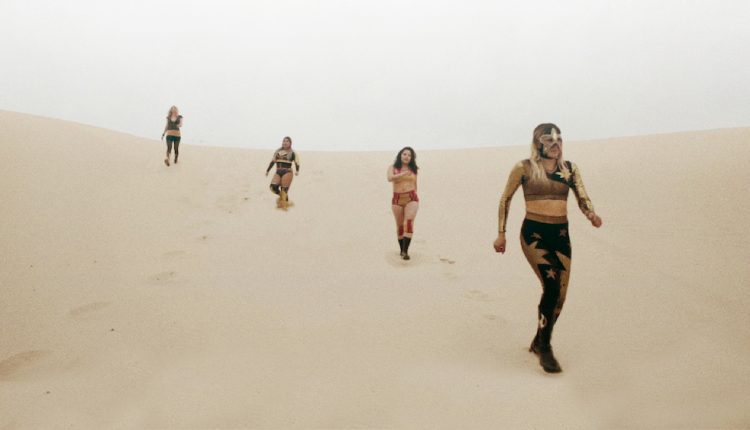 In 2013, a woman gained notoriety for murdering two bus drivers in Juarez. Calling herself ‘Diana, The Huntress‘, she said that her motive was to avenge female factory workers who had been sexually abused and possibly murdered by bus drivers. It is this chequered history that sets an initially sombre tone for Paola Calvo and Patrick Jasim’s documentary Luchadoras, which follows a group of female wrestlers (known as luchadoras) as they strive for a future amid a misogynistic society.

As the film opens, we see several women take the bus home to Juarez, solemnly referred to as ‘The Most Dangerous Place in the World’. The contemplative voiceover slightly betrays a shared fear of their safety, which is exacerbated by the sight of weathered ‘missing’ posters of numerous women. The frustrating lack of reasoning and concern behind Mexico’s femicides highlights a shockingly blatant disregard towards women and poses the question: what can be done to protect them?

It is this need for empowerment and personal safety that brings the documentary’s subjects, three different luchadoras, into the limelight. Through their intimate, close-up direction, Calvo and Jasim take the time to explore each of their lives. Baby Star is a single mother who wants to make a comeback, Lady Candy is trying to get access to her young daughters in El Paso, and Mini Señorita dreams of escaping her factory worker life to become a full-time luchadora.

Each woman’s personal mission is filled with determination and laced with melancholy as they try and survive in a world dominated by men and violence. Their general quietness hints at their difficulty in expressing themselves, but they quickly come alive when in full costume. As soon as they enter the ring, their luchadora personas empower them to fight and defend themselves while inspiring their spectators. As the film nears its close, we are left with an unexpected feeling of hope for the future.

Overall, Luchadoras is a moving, inspiring documentary. Through the sisterhood of three luchadoras, they not only celebrate the strength of Mexican women but also challenge the social injustices they face and the labels that define them.