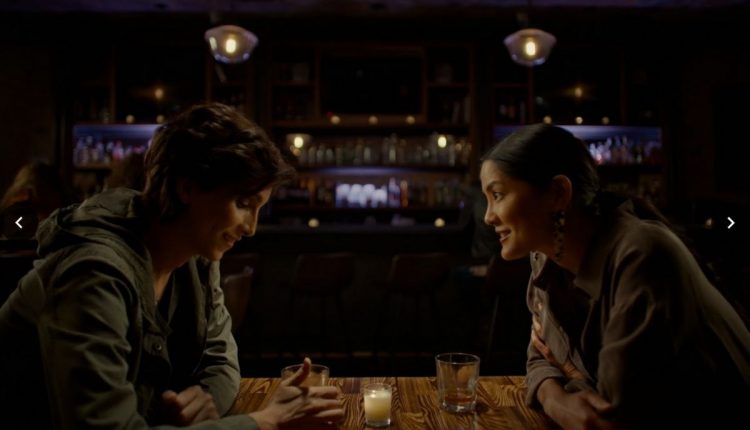 Marking the directorial debut of Mari Walker, See You Then stars Pooya Mohseni and Lynn Chen in a drama about love, loss and relationships. After a decade apart, Kris (Mohseni) invites Naomi (Chen) to dinner while visiting Los Angeles for a work conference. During the evening, the two talk about their lives while they have been apart, causing buried feelings to slowly resurface.

When we first meet Kris and Naomi, there is an initial awkwardness that rattles their connection. Kris seems happy to see Noami but it is not overly reciprocated. It doesn’t take long for the conversation to turn to Kris’ transition, a life event that Naomi was unaware of and one of the main reasons for Kris to break-up with her. While Kris is treating the reunion as a trip down memory lane, it is clear that Naomi is not over their breakup. Frustrated with the lack of explanation or even insight into Kris‘ decision to suddenly leave, Naomi’s bitterness causes her to hold back from her former lover’s affection. Nonetheless, the reunion allows the two women to uniquely confide with each other.

During the evening, their past allows them to easily reflect on the last ten years and confide in their respective struggles. Kris talks about her quiet life in Phoenix, Arizona, while Naomi talks about her life as a married professor and mother of two. With both Walker and Mohseni being trans, there is an air of insight and awareness regarding male privilege and how coming out as trans affects more than just personal identity.

With its conversation-driven narrative, See You Then has a vibe similar to Richard Linklater’s Before trilogy and the chemistry between both Cohen and Mohseni offers a comforting familiarity. Behind the camera, Walker’s direction keeps the focus on her leads while using the atmosphere and sound to emphasise their emotional connection. As a result, Kris and Naomi bob around Los Angeles in their own little bubble with nothing but memories and conversation between them.

Talking about everything from parenthood to the troubles of being a woman, their easy chemistry allows a constant flow of communication that makes it easy to forget the evening’s initial uneasiness. However, a moment of mild flirtation rehashes the friction between them, highlighting that although they may have now grown up, the past cannot be changed. It is this underlying tension that ultimately fuels a lengthy, poison-filled fight between the two, causing doubt on their renewed connection.

Overall, See You Then is a slow-burning drama that highlights the art of open and honest conversation, no matter how painful it can become.