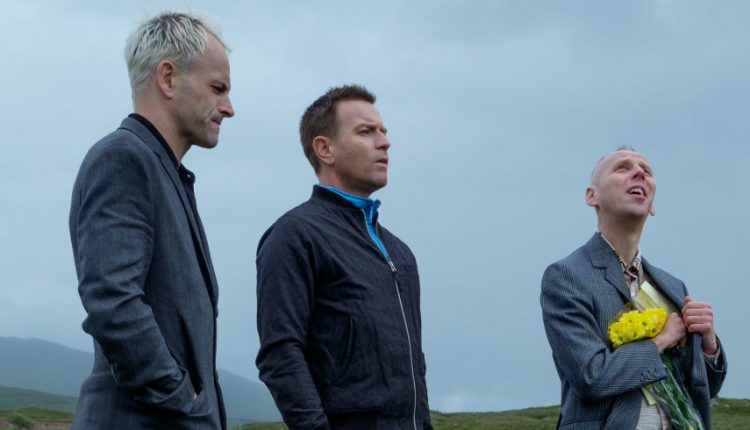 “The most energetic film we have ever seen,” is how Danny Boyle first envisioned 1996’s Trainspotting. As it turned out, that was something of an understatement. A wild, sweaty, angry ode to a bunch of Scottish skag heads, the seminal Irvine Welsh adaptation felt like it was wired to the post-Thatcher optimism of the Cool Britannia movement. Erupting seemingly out of nowhere, this pokey British indie flick took the world by storm and became the bold, outrageous avatar for a generation. And now it finally has a sequel.

But if that film was the euphoric high, then T2 Trainspotting is the cataclysmic comedown. In the intervening twenty years, that swaggering hedonism has faded and been replaced by sombre introspection as the fear of middle age took hold. And while it’s still funny, moving and wildly inventive in places, this belated follow-up just doesn’t compare to that first unexpected head rush.

Two decades after scarpering with a bag full of cash he stole from his best mates, Ewan McGregor’s Mark Renton is still running – only now his feet are pounding along on a treadmill in an Amsterdam gym. After suffering a heart scare, coupled with the rest of his life crumbling around him, Renton decides it’s time to return to Edinburgh to look up his old friends.

Not that any of them are particularly pleased to see his return. Jonny Lee Miller’s Sick Boy, now Simon, is running his Aunty’s half-empty pub while attempting to blackmail local politicians with the help of his prostitute girlfriend (Anjela Nedyalkova). Spud (Ewen Bremner) is back on smack and has lost both his job and his family to addiction. And Robert Carlyle’s Begbie? He’s just taken a rather bloody and stabby route out of his twenty-year prison sentence and is once again prowling Edinburgh’s cobbled streets in search of revenge.

With Renton revisiting all his favourite old haunts, it’s no surprise this film feels awash with nostalgia. Whether it’s recreating iconic moments like Renton grinning wildly through a car windscreen or projecting Super 8-style footage of the boys’ innocent childhoods onto every available surface, T2 is at least as focused on what went on before as it is with what’s happening right now. And that’s its biggest stumbling block.

Wistful backward glances might befit a poignant salute to middle age disappointment but it also dampens the fiery intensity we expect of a Trainspotting film. The first film was fuelled by Renton’s anarchic, anti-establishment worldview, but twenty years on his life has crashed into a dead end and he has no idea what to do about it. That listlessness is reflected in the story, which drifts aimlessly between four middle-aged men who fear their next stop in life is the scrap heap and who try desperately to cling to past glories in order to compensate. Well-observed and resonant as this might be to its original audience, such morbid themes put quite the downer on proceedings.

That loss of passion is also felt in the visuals. Boyle revives the original’s electrifying mix of grubby realism and hallucinogenic fantasy, but the hurtling handheld camera angles, freeze frames, zooms and jump cuts just don’t feel as tight and edgy as they once were. There are still some great flourishes – Renton cradling a free-falling Spud is a particular highlight – but mostly it’s the same old techniques that have since been aped by countless low-budget gangster flicks.

Even our four favourite smack heads have lost their spark. Without his raging charisma, Renton comes across as a selfish jerk who has no remorse for stealing from his friends and even plots to betray them all over again when the opportunity arises. Simon is likewise without charm, clinging to Renton’s treachery in order to excuse all the other terrible decisions he’s made throughout his life. And Begbie, having moved on from terrorising random revellers in the pub to intimidating his own family, now seems like nothing more than a violent thug.

Only Spud retains our sympathies. A fundamentally kind-hearted man who’s been badly let down by an unforgiving welfare system, Spud is the only one we’re really rooting for as he strives to channel his addictive energy into chronicling his friends’ adventures. Thankfully, he’s also the one who comes closest to a triumph when the film reaches its bittersweet end. Everyone else is seemingly content to wallow in their faded pasts instead of trying to move forward. So much for choosing life.