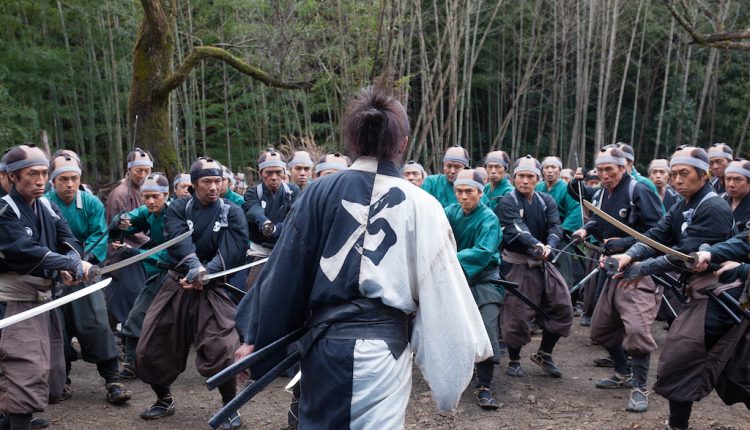 Since 1991, Japanese director Takashi Miike’s extensive career comprises more than 90 directorial features. Ranging from the controversial Audition and the crowd-pleasing 13 Assassins, his diverse filmography shows that he is not afraid to take on a creative challenge – and his latest feature, albeit his 100th film, is no different.

Based on the eponymous manga by Hiroaki Samura, Blade of the Immortal (original title: Mugen no jûnin) follows Manji (Takuya Kimura), a warrior who cannot be killed. After young Rin (Hana Sugisaki) witnesses the slaughter of her parents at the hands of skilled fighter Kagehisa Anotsu (Sôta Fukushi), she asks Manji to avenge their deaths.

The initial concept of the film comes across as typical Miike: insane yet incredibly complex and violent. However, there is not enough character development to form a solid alliance with either the supposed heroes and villains, so the supposed revenge plot isn’t very convincing. Along with the complex narrative and certain unnecessary subplots involving Anotsu’s grandiose delusions, the film comes across as needlessly complicated.

In addition, the characters are quite unbalanced. Badass Manji presents himself as a gruff anti-hero with a deadpan sense of humour while Rin comes across as a bit too naive to take on such an ambitious revenge mission. Together, they share an odd, occasionally vague chemistry that only works during the violent fight sequences. In comparison, Fukushi’s youth and model-like good looks only make Anotsu a somewhat boring, one-dimensional villain that doesn’t him make him a serious antagonist.

Where Blade of the Immortal shines is in its style and fun factor. The dialogue is snarky yet comical, and the action scenes are relentless and feature small yet very stylised horror moments, which stop the film from being over-serious.

As a feature, it is more fast-paced in comparison to Miike’s previous samurai films and a lot more fun. While it is stomach-churning in places, Blade of the Immortal is entertaining and delightfully insane.