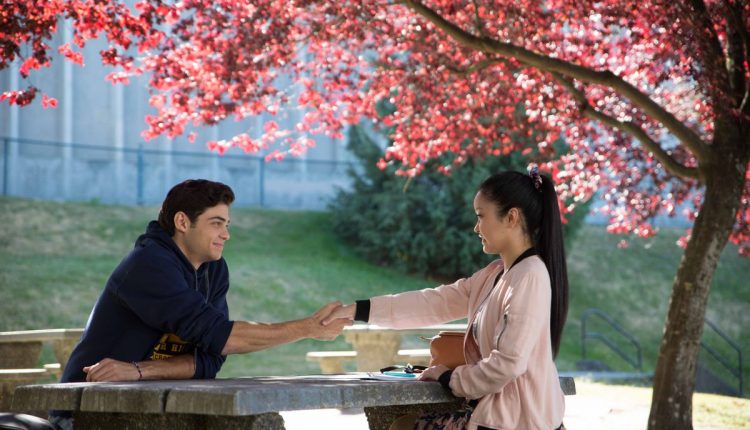 To All The Boys I’ve Loved Before: Flickfeast and Chill Film Review

We invite you to Flickfeast and Chill and get to grips with the best new films on streaming services. This edition, Katie Smith-Wong settles down with Netflix and To All the Boys I’ve Loved Before. Five minutes in and she’ll give you that look…

To All the Boys I’ve Loved Before stars Lana Condor as Lara Jean Covey, a Korean-American teenager who dreams of romance but has trouble expressing her feelings, choosing to write (but never send) love letters to each boy she has had a crush on. One day, she horrifying discovers that her five crushes have received their letters, including her sister’s boyfriend Josh (Israel Broussard) and school jock Peter (Noah Centineo), who proposes that Lara Jean becomes his ‘girlfriend’ to make his pretty and petty ex-girlfriend Gen (Madeline Arthur) jealous.

Adapted from Jenny Han’s 2014 young adult novel, To All the Boys I’ve Loved Before is sure to strike a chord looking for further representation in cinema. Similar to breakout hit Crazy Rich Asians, it is led by an enigmatic female Asian-American lead who struggles to find her place in the world – however, instead of high-class Singapore, this takes place in high school. With it comes all-too-familiar, predictable themes and plot elements such as peer pressure, awkward love triangles and embarrassing family members.

The core plot element of the pairing between a popular guy with a social ‘outsider’ is a formula revisited in many previous teen films and here, it is no different. Lara Jean is content being ignored by the popular kids while Josh is the typical jock who is dating the pretty blonde girl. But neither ‘grow’ to respect each other – they are already familiar with each other, essentially bypassing cringeworthy awkwardness on the road to romance.

However, in comparison to teen films such as She’s All That, A Walk to Remember and American Pie, To All the Boys I’ve Loved Before isn’t oversentimental or incredibly fixated on sex or general nakedness. Instead, Sofia Alvarez’s screenplay offers natural dialogue without cryptically dawdling interactions while Susan Johnston’s direction closely focuses on Lara Jean’s ‘journey’ in overcoming her fears.

With her wide-eyed innocence, Condor exudes the typical ‘girl-next-door’ persona perfectly as Lara Jean chooses to hide her insecurities and feelings to remain practically invisible among her peers. She not only has a great rapport with on-screen sisters Janel Parrish and Anna Cathcart, but she also shares a wonderful chemistry with Centineo, whose portrayal of Peter combines charisma and swagger.

Already a favourite among fans, To All the Boys I’ve Loved Before is heartwarmingly sweet and features delightful performances. As the first book of a trilogy, time will tell whether we’ll see more of Lara Jean Covey.