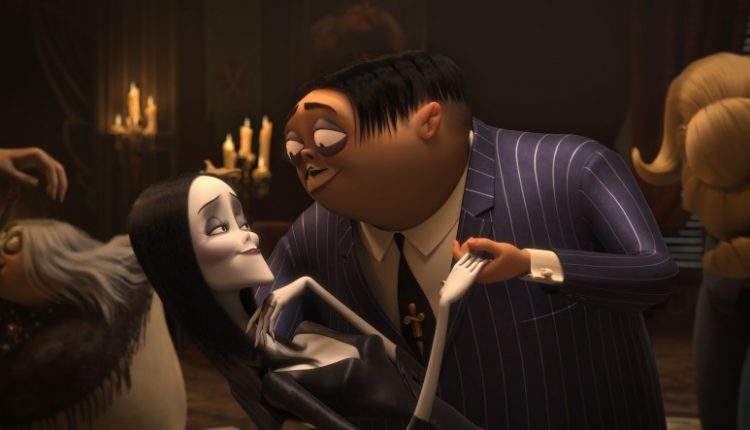 Apparently, it is not too creepy and too kooky nor is it too mysterious and spooky to revisit the antics regarding one of America’s favorite ghoulish families from the world of the comic strips and 1960s nostalgia television. Gomez, Morticia, Grandmama and the rest of the comical corrosive clan are back but in crisp animation form in co-directors Conrad Vernon’s and Greg Tiernan’s family-friendly but all-too-formulaic flavoring comedy The Addams Family. The timing is right for the release of this freakish familial bunch and their bizarre behaviors with the Halloween season right around the corner. Unfortunately, the tired novelty of serving up these frightening funny faces in a packaged kiddie comedy is more so a tepid trick than it is a treasured treat.

Both Vernon and Tiernan collectively have previously experiences in overseeing their fair share of children animation that range from the obscure to highly popular fare such as the Shrek film series to Sausage Party, These artists possess the appetite for sparking young minds with their creativity aimed at targeted youth-oriented audiences. Plus, it certainly is a major win for getting on board some of the notable Hollywood star power to voice the fun-loving Addams’ creepsters. Still, The Addams Family has a sweet tooth for the manufactured mockery but never seems to totally embrace its dark, devilish tendencies while being smothered with conventional sight gags and lame edginess. Let’s face it…The Addams Family, at least this version anyway, does not provide the desired “ooky” in this case.

There is not really an imaginative bone in the thinly skeleton shenanigans of the oddball Addams crew. Manufactured flimsy one-liners and trivial attempts at playful raunchiness feels sketchy at best. One is left wondering what would the off-kilter eeriness of Tim Burton’s touch would be like had he administered his brand offbeat irreverence to this rudimentary romp? Look-wise, the vivid gothic make-up of The Addams Family is vibrantly rich in texture. If only the lackluster story could match the winning animation imagery then The Addams Family could have been as appetizing as bobbing for bloody apples.

Indeed, baby-boomers (or anyone else privileged to have seen either the aforementioned classic 60s sitcom reruns or the Barry Sonnenfeld-directed 1991 feature film) will recall the fruitful freaks with immediate remembrance. Oscar-winner Charlize Theron is on board as the voiced persona of thinly-boned Morticia while Oscar Isaacs does the vocal duties for Gomez. The peculiar Addams siblings Wednesday and Pugsley (Chloe Grace Moretz and Finn Wolfhard) are front and center. Unfiltered Uncle Fester and Grandmama (comedian Nick Kroll and Bette Midler) figure into the mix. Plus, Vernon does double duty on-screen as the exasperated Lurch the butler.

The supporting players are also a who’s who of notables lending their vocals to the Addams weird universe. The iconic Cousin Itt is voiced by rapper/actor Snoop Dogg. Also, it is nice to see former SCTV alums Martin Short and Catherine O’Hara appear as the Frumps–the dearly departed opinionated parents of Morticia. The always entertaining Oscar/Emmy winner Allison Janney is added as a pain-in-the-neck TV personality out to expose and dispose.

The assembly of distinctive talent for The Addams Family is undeniable but there still is no excuse for this vehicle being an average family film that does not begin to poke at the unctuous charm of the giddily ghoulish Addamses. Some children may get an instant kick out of what they conceive as colorful caricatures. However, the rest of us will want to know why this toothless gem is playing it so safe even for inferred kiddie fare.

Vernon and Tiernan set out to deliver what they perceived as an amusing and upbeat homage to the Addams’ zany nucleus of nostalgia. Certainly the animated comedy has its high-spirited moments. Plus, the message about being an outsider in society and facing scrutiny for being different should serve as a viable lesson to youngsters. Still, The Addams Family feels stagnant in its perceived wackiness. Thank goodness for the breakout musical Lurch because otherwise their house may be a museum but we may not have necessarily wanted to see them–The Addams Family (snap fingers).