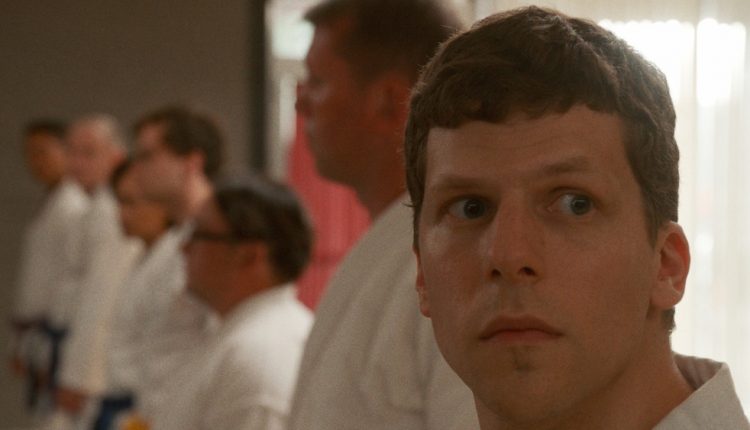 Writer-director Riley Stearns (“Faults”) constructs the offbeat comedy The Arts of Self-Defense with such a biting surge of wryness that the message is quite clear in the satirization of masculinity and all its related toxicity. Stearns strategically picks apart the cynicism and ridiculousness of the machismo mode in a sardonic vehicle that revisits the theme of perceived manhood. Smart, insightful and off-kilter, The Art of Self-Defense is resourcefully hysterical in all its concrete skepticism. Stearns’s direction and writing give some relevance to the inside captious commentary.

Craftily, Stearns uses his unlikely leading man in the flippant film’s front-and-center weakling in accountant Casey Davies (played so dutifully by the “Social Network” Oscar-nominated star Jesse Eisenberg) as the pawn representing the antithesis of manliness. Poor Casey seems to be surrounded by male testosterone that challenges his own sense of manly self-worth. For starters, it does not help that the put-upon guy is blessed with a unisex name. Or how about being mistaken for a female whenever he answers his phone? Perhaps Casey is overwhelmed by the R-rated workplace chatter carried on by his male cohorts? Indeed, Casey is losing his hold of masculinity and all its unexpected trappings. What will it take for Casey Davies to break out of his male-enhanced malaise?

It will take one haunting and harrowing experience for Casey Davies to finally snap out his victimhood state. When Casey decides to visit the grocery store on a late night run he is attacked by motorcycle thugs. The harsh mugging naturally had a dire effect on the understandably shaken Casey. The realization of not being able to defend himself properly in this adverse predicament suddenly compels Casey to take action and find some purpose in his questionable existence. Something has snapped within the fragile, French-language learning dog owner (a less-than-man-fearing breed dachshund no less) to finally own his brand of masculine standing.

Casey’s first instinct is to purchase a gun as an overreaction to his caustic confrontation by the sinister riff raff bikers that compromised his safety. However, the visit to the gun shop proved to be a waste of time for the timid Casey. Still, the curiosity of crossing paths with a karate studio has Casey rather intrigued by the self-defense classes taking place inside the venue. In particular, the karate instructor known as “Sensei” (Alessandro Nivola) seems to captivate shy Casey’s imagination as a man saddled with wisdom and a mysterious philosophy of brute and benign sentiments. Hastily, Casey enrolls in Sensei’s classes that create a stimulating mystique and verve that now liberates the once less-than-confident meek accountant. Soon, all of Mr. Davies’s preoccupation is reserved in the universe of the Sensei’s ritualistic realm of mystical protection and serenity.

At this point, Casey has embraced the coldness and fearless side of himself–something that was vastly foreign to him in conception. Sensei’s encouragement for pushing the urgency of aggression with Casey’s tainted soul is manifested by the master’s absolute truth in discipline and dedication. From hardcore music to the ability to convincingly combat sinister forces the Sensei instills in Casey his needs to get locked into the mindset of defined masculinity in every sense of the word.

Although Sensei wants to eagerly cultivate the manly rage in his newest charge Casey, he seems quite dismissive of the one female student in his class named Anna (Imogen Poots) that puts to shame the rest of her male counterparts as she demonstrates inherent toughness and tenacity in her self-defense methods. Nevertheless, resilient Anna is part of Sensei’s specialized night classes where the fighting practices are more graphic and robust. Eventually, Casey morphs into the confrontational beast that makes him eligible for the ruthless nightly sessions. Of course, things start to unravel in a surreal fashion that renders the whole cutthroat affair indescribable.

The Art of Self-Defense is an absurdist look at a mild-mannered office dweeb’s self-discovery and awakening to the societal expectations of male-dominated hostility. Stearns does not necessarily redefine or explore the notion of male identity as anything distinctive or innovative but his sharp observational awareness into his protagonist’s unfulfilled psyche is psychologically enhanced in silent rage and colorful ridicule. Eisenberg, one of the more adventurous and conscientious actors around that is known for taking on contemplative message-driven film projects, is transfixing as the empowered nebbish wonder finally stepping out of his restrictive shadows of doubt and intimidation. Using the confines of a karate class to reinforce the satirical edginess of self-actualization for a group of individuals broken in self-doubt and vulnerability is quite imaginative in all its cunning impishness.

Profoundly witty and oddly reflective, The Art of Self-Defense is one of the year’s best uniquely dark comedies to give a karate chop to the inactive funnybone.