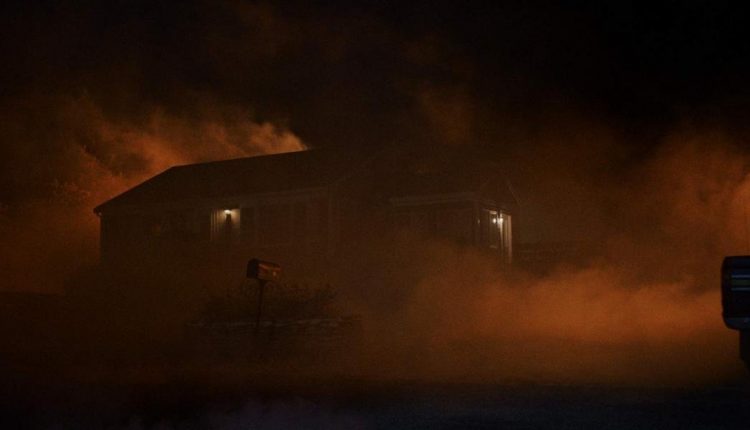 Like Emily (Liana Liberato) and Randall (Noah Le Gros), the young couple at the centre of director / writer Jeffrey A. Brown’s new mystery horror The Beach House, I was looking forward to spending some down time enjoying the peace and solitude of visiting this idyllic abode by the sea. Unfortunately both them and I found the resulting experience anything but pleasant. Admittedly I had the advantage of knowing in advance that not everything was going to go as planned. However even this didn’t prepare me for ninety minutes of torture which left me shivering for all the wrong reasons.

Our hapless acquaintances decide to take the weekend away to an isolated beach house which Randall’s father owns, in the hope of rekindling their romance which has not exactly been blooming recently. Upon arrival however they find an older couple, Mitch (Jake Weber) and Jane (Maryann Nagel), who claim to be friends of Randall’s father, already ensconced in the house. Following initial discomfort the couples form an uneasy friendship, resulting in an evening of drinking and the inevitable partaking of recreational drugs. Not until morning however, when Emily and Randall awake much the worse for wear, do they discover Jane who isn’t feeling much better, and no sign whatever of Mitch. It’s only after they go to the beach in search of Mitch, that Emily and Randall confront the true horrors in the white sands and blue ocean that lie beyond the beach house.

The Beach House can be cut into three parts each of which, though initially promising, soon falls into a dreary and confusing mishmash which fails to deliver little more than sporadic flashes of inspiration amongst long bouts of tedium. Starting with Emily and Randall’s arrival at the house and the discovery of their unexpected house guests, the film establishes quickly an unspoken air of creepiness which pervades the house and surrounding area, setting the scene for what one hopes will be an onslaught of aquatic nastiness ….. which unfortunately takes far too long coming.

After about forty five minutes of not very much at all, the viewer could be forgiven for being on the point of dropping off, only to be jolted back to consciousness with a shock of disturbingly realistic and gruesome body horror drawn out – literally – over five minutes.

Things then kick off for real, giving the impression the film makers are overcompensating for the tediously slow build-up which has gone before. People disappear without explanation, whilst others turn up with just as little reason. Things slither from the sea and line up on the beach, only to never been seen or mentioned again. And all the while a strange, dense fog, which may or may not be the source the bizarre happenings in the vicinity of the beach house, begins to slowly envelope anyone and everything not quick enough to move from its path.

And that’s it. Too many loose threads are left unfinished which, if more adeptly woven together, may have resulted in a work of subtle Lovecraftain disquiet. Instead the finished exercise appears as a patchwork ocean of banality, interspersed with the occasional moment of bloody inspiration.

The Beach House is now available to view on the Shudder streaming platform.