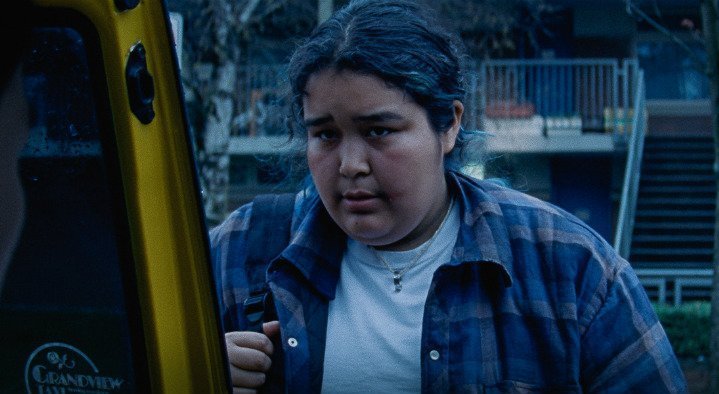 The conception of sisterhood is authentically translated so convincingly in the Vancouver-set melodrama The Body Remembers When the World Broke Open. This stirring and insightful Canadian feature is a well-crafted and introspective examination of a couple of indigenous women from different walks of life that experiences the traumatic cause and effects of life-changing circumstances rendering them uncertain and vulnerable. This is a piercing character study of unprotected women on a collision course only to find bonding in their shared sense of cultural unity and shattered struggles for survival. Refreshingly digested in its stark observations about feminine displacement, The Body Remembers When the World Broke Open is openly candid and courageous in its intimacy that range from jeopardized motherhood to the perils of an inevitable chaotic legacy.

Co-directors/co-writers Elle Maija Tailfeathers and Kathleen Hepburn serve up an engrossing account involving two female souls meeting on the unpredictable chilly streets of Vancouver due to an unkind situational dilemma. Aila (played by Tailfeathers) is of a mixed Blackfoot and Sami persuasion. She is educated and had just returned from the gynecologist office when she runs into another indigenous woman in the desperate Rosie (newcomer Violet Nelson). The disheveled Rosie is a pitiful sight to behold–barefoot, bruised, soaking wet, spaced out, etc. As startling as it was to acknowledge Rosie’s obvious discomfort, Aila still manages to give sudden comfort to the endangered woman as she escapes the corrosive clutches of her nearby abusive, acid-tongued boyfriend. Thankfully, Rosie is whisked away to the shelter but the writing is on the wall–this neglected woman has seen her fair share of violence and insensitivity.

Aila, the young professional woman looking to having a baby of her own, is marvelously situated in her life. She is in a long-term relationship and her past had been checkered by disappointment courtesy of aborting a child some time ago. Naturally, Aila is sympathetic to the 19-year old Rosie appearing somewhat defensive and evasive. Aila’s kind-hearted interest in Rosie is questioned. Understandably, the impoverished Rosie is devoutly cynical at the world and the sudden kindness of a well-adjusted and generous Aila adds to the mistrust and confusion. The various caseworkers, law enforcement officials or anybody in shouting distance have not lifted a finger to ensure the pregnant Rosie’s welfare being in tact. So why is the inquisitive Aila taking the time to show her some salvation? Is it too late to lessen the psychological damage of a young women emerging from an abusive relationship? Well, Aila will certainly try to break that hard edge that is the flippant Rosie.

In due time, the women learn to co-exist as their bond tightens amid the floating adversities and pending anxieties concerning motherhood. Aila asks the pertinent questions to a skeptical Rosie in hopes of wondering what her next move is during the transitional, trying times. As for Rosie, her main concerns of the moment involve the immediacy of having her clothes dried or feet covered with decent shoes. Nevertheless, the back-and-forth chatter between these adventurous Native women is revealing in its low-key urgency. The links of spirituality, skepticism, cultural commonality, and friendship are fostered within the mindset of a couple of women connected to the realm of the unknown.

The Body Remembers When the World Broke Open is sleepily poetic in its tragic trappings. Fittingly uplifting and observational, the tag-team talents of Tailfeathers and Hepburn are displayed in a symbolic exposition of Native women not often seen so complicated in self-discovery mode. Artistically truthful in its messaging and genuine in its hungry soul, Body represents the dignity, dysfunction, and disillusionment of Native/Indigenous womanhood that cuts close to the emotional bone. There is an understated intensity that resonates so effortlessly. The showcasing of battered women and the redemption factor is nothing new to the cinema psyche. The umbrella of domestic abuse–the terrifying topic that is sadly so common in abundance worldwide–is wrapped up in the eye-opening intricacies of a quaint, quiet fable as expressed by the stark sentiments of its resourceful feminine handlers.

Both Tailfeathers and Nelson make for a formidable tandem touched by defiance and detachment. Richly transparent in its boldness for despair and destitution, The Body Remembers When the World Broke Open never trivializes the plight of its ambivalent protagonists even if the hint at being defeated in life’s rocky path seems so inevitable.

The Body Remembers When the World Broke Open