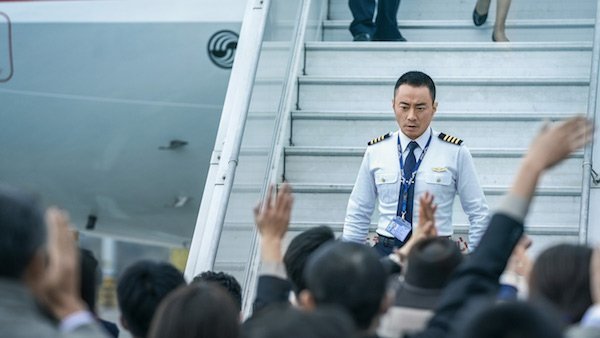 Although The Captain feels occasionally choppy in its tactical editing complete with cornball confrontational twisty situations Lau still manages to convey the anticipated high stakes hurdles that befell the plane’s heroic but harried Captain Liu Chuanjian (Hanyu Zhang) and the panicky passengers that were entrusted in his procedural abilities. Lau, known for his action-producing prowess courtesy of the Infernal Affair movie series, establishes a rollicking mid-air crisis that more than not hits its nail-biting rhythms. The manufactured 30,000 feet skyline suspense may not be the most convincing display of psychological turmoil but the CGI flourishes in The Captain is enough to add an element of uncertainty and wonderment about a harrowing true story event grounded in familiarity.

Lau and screenwriter Yu Yonggan (“The Bravest”) concoct an above-the-clouds actioner that proudly revels in the traditional tropes of problematic plane potboilers. Sadly, The Captain has not provided a distinctive frontman to its sinister story in the way the aforementioned Sully’s idealistic Chesley Sullenberger was received or Flight’s capable but seriously flawed Whip Whitaker was compellingly portrayed. Still, the formidable Captain Liu Chuanjian holds his own as a solid family man whose sweet promise to return home soon to partake in his young daughter’s birthday party speaks volumes of a man with good-natured character and commitment.

Thus, the tone is set for that fateful day on May 14, 2018 where the unflappable Chuanjian and his crew and passengers will encounter the ultimate flight from hell…the takeoff from Chongqing to Lhasa, Tibet that would include a massive cockpit windshield shattering placing everyone on board in immediate peril. The turbulence, both outside and inside the aircraft, would be a horrific reality for lives possibly being endangered en route to a destination now seemingly unfathomable to reach. Naturally, this challenges Capt. Chuanjian to show what this professional aviator possesses as a skilled leader. It would take wit, ingenuity, survival instincts, and focus for Chuanjian to guide others from this possible massive tin-winged casket in the sky.

Among the crew members along for the harrowing ride to share in the jeopardized proceedings is Chaunjian’s first mate Xu Yichen (Hao Ou) whose efficiency is so surgical–something that ironically undermines what will become toxic when the extensive safety measures are usurped by the freakish cockpit cave-in causing the flight damage. Bi Nan (Qin Li), the lead flight attendant manager, oversees a top-notch staff but she and her workers are overwhelmed by the startling happening of terror as the frenzied passenger understandably are in doomsday mode. Together, Chuanjian and his staff must navigate the life-threatening emergency at hand. The Captain’s foreshadowing quip about something possibly going wrong to his co-pilot despite reassured plane operations turns out to be a prophetic insight.

The Captain does not go much into character development detail because the only concern of interest lies in the overall dilemma of the plane’s hasty predicament. The main journey through purgatory is predicated upon the bothered shoulders of Zhang’s Capt. Lui Chaunjian, the tortured tour guide through the deadly skies whose resourceful steadiness is the selling point of this disaster thriller. The Captain may feel somewhat stuffy with its insistence to outlining airport protocol–the varied safety checklist of instructional preparation of the airline, its employees and the flying patrons until the unthinkable occurs. It is an eerie look at the hazardous outcome that would be unimaginable to both casual and habitual travelers alike. Nevertheless, Lau is able to inject the conflict and outrage that bombarded the unsuspecting victims of a grand scale accidental occurrence that could have resulted in an uglier reality.

The wreckage of set pieces, mass confusion and delusion, a body threatening to be sucked through a pressured and exposed cockpit, and whatever other hysteria-oriented goings-on is presented colorfully in Lau’s action-adventure spectacle that feels as unapologetically loose and unrestrained as a defective seat belt. The Captain is an edgy joyride that has convincingly graced the giddy box office in China and hopefully elsewhere that appreciates queasy popcorn entertainment that is eager to win over one’s enthusiastic scream.