After such action-Jackson roles as Taken and The Grey, Jaume Collet-Serra’s The Commuter sees the now-65 year old Liam Neeson’s latest bid to put himself forward for a hip operation. Here, as Michael Macauley, he stands of the edge of a metaphorical precipice when his connecting train is late, only made up of two carriages, and it’s got one of those condescending Talking Toilets. No…wait!

Less realistically than that, Macauley gets approached by a stranger (Vera Farmiga) on his train who makes him an offer he can’t refuse: identify the person who doesn’t belong on the train and take a hefty stack of cash as a reward. Of course, it’s not quite that simple. Before long, events take a dark turn, bodies pile up and Macauley’s conscience kicks in as he tries to turn the tables.

Neeson carries the film as you’d expect, but Farmiga, Sam Neill, Patrick Wilson and Breaking Bad‘s Jonathan Banks are all criminally underused. The other passengers on the train are given such short shrift that it’s almost ironic. That is ,it would be if they didn’t seem to know intimate details about the other passengers’ lives. I mean, God forbid you even make eye contact on a train ’round our way!

There are some neat montages of Macauley’s everyday commute that support such familiarity and the directorial ambition is clear, if not occasionally misjudged. The Dolly Zoom shot, famously used to emphasise the danger and onset of panic in Jaws, is employed here to highlight Neeson’s dire sitch. Trouble is, I’d fancy my chances on that train more than on that beach and the shot seems clunky as a result. Although not quite as clunky as Neeson’s exchange with an arrogant banker; “Goldman Sachs? On behalf of the American middle class: fuck you!” Political, with a lower case ‘p’. 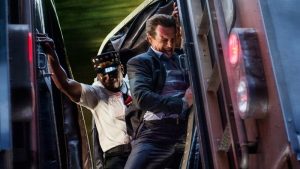 Despite this review’s intro being all age-ist and that, Neeson is utterly believable as a former cop who could still eff you up if he wanted to. His age shows in his mobility during the fight scenes and his wheezing around the train but it all contributes to his everyman status. In particular, the axe battle (a pick axe vs. a Fender strat) is fun and inventive as well as showing how our hero will need to try all means to gain an advantage.

Whereas the mid-aisle action looks great though, the CGI shots of the train itself (particularly towards the climax) are more Riddick than Vin Diesel. Perhaps a dialing down of the train’s laughably OTT final sequence would have made the CGI seem less Second Class. By that point you’re either along for the ride or you’ve jumped, dropped and rolled. Just as well, as the plot’s last ditch attempt to return to a high-falutin concept is grossly misjudged and out of place.

The Commuter’s worth a ride, but only if you can dodge the fare.