In Justin Benson and Aaron Moorhead’s The Endless, two brothers re-visit the cult they escaped from 10 years ago, only to suspect that there may be some truth in its obscure and otherworldly beliefs.

As with the directors’ previous surreal genre-bending feature Spring, The Endless has a complex relationship at its centre. Instead of a complicated romantic tale, this one is a familial relationship struggle where brothers, played by the film’s directors, Justin (Benson) and Aaron (Moorhead) clash over their opposing opinions of the cult they once left behind. Aaron finds himself drawn to the mysterious cult once again, describing the community as the only place he’s ever been happy. Justin, on the other hand, is determined to make his life work in the “real” world, refusing to fall victim to the cult’s ambiguous way of life and strange fascination with an otherworldly, controlling being.

The Endless is a multifaceted story that touches on ideas of time and the supernatural, working well as an exploration of home and happiness. Aaron’s inability to be happy without the cult suggests that the expected way of living in society is just as flawed as this cult’s deviation from supposed normalcy. What we are presented with is a complex tug-of-war – and perhaps a more literal one that you might expect – between the world we know and all the unexpectedness that comes with it, and a more predictable way of life that the cult offers. 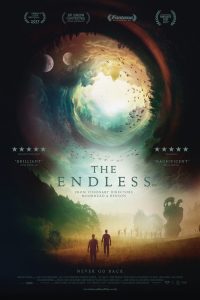 I love it when a film asks questions, refusing audiences the comfort of being a passive viewer, but there is a frustrating amount of dawdling in The Endless that will even annoy those who praise films that are challenging to watch. Far too much of the film is made up of repetitive conversations and scenes I can only describe as non-moments, because they feel so unimportant. It’s a film I was desperate to love, but one that eventually lost me in its dreary visuals and over-long execution.

The Endless tries to cover a lot of ground and its exploration is not always coherent. Although this is surely purposeful, I’m certain many will fail to enjoy the film’s consistent obscurity and slow-burn pacing, paving way for a finale that is not wholly satisfying. Although the story holds itself on a pedestal, showcasing itself as a unique thought-provoker, I’d argue that The Endless is not as clever as it believes. There are similarities between this and films like Nacho Vigalondo’s Timecrimes and Shane Carruth’s Primer that present their science fiction thoughtfully and controlled, but also in cult-centred slow-burners like Martha Marcy May Marlene and Faults.

Do all of the parts of The Endless culminate into an entirely interesting and coherent whole? Not entirely. Nonetheless, the ideas present in The Endless are intriguing and bold, ensuring that directors Moorhead and Benson are a strong force in the world of complex supernatural dramas. The Endless is an oddity that should be applauded, but as with Spring, is sure to have its fair share of haters along with those that find it a captivating journey. I sit somewhere in the middle as someone who is definitely fascinated by its peculiarity, but not able to forgive a vagueness that sometimes feels forced and familiar.