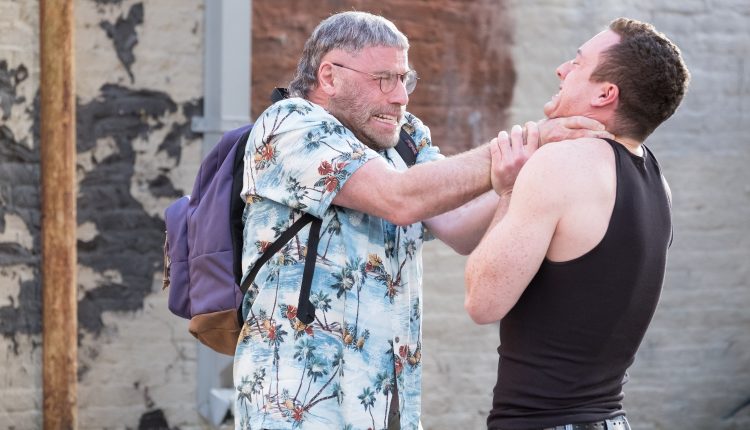 Never meet your heroes. A lesson that will be learned all to well in The Fanatic.

When Moose, a celebrity-obsessed fan, feels slighted by action superstar Hunter Dunbar at an autograph signing, he embarks on an unhinged quest for acknowledgement and validation from the actor. One that will change both men long after the final credits roll on their encounter.

The story is apparently inspired by Durst’s real-life encounters with a starstruck harasser. Albeit heightened and exaggerated. One hopes it is not an autobiographical confessional!

Beginning with a quote “You’re my fan. Without you I’m nothing”, it has clear aspirations to be a commentary on the symbiotic relationship between stars and their fans.

Set in Hollywood, these characters should know better than anyone that any film featuring the line “I’m your number one fan” is never going to end well e.g. Misery, The Incredibles.

While the film aims to be in the same realm as those Oscar-winners, The Fanatic sadly falls way short.

The biggest issue lies in the central character of Moose. A Worst Actor Razzie-winning performance by John Travolta. It is one of those “as you have never seen him before” performances and for good reason.

At one point during the film’s unnecessary voiceover narration, a character describes his actions as “Moose didn’t just cross the line. He f*ckin’ nuked it”. This accurately describes Durst and Travolta’s choice to make the character of Moose autistic. It is possible this was to try and elicit sympathy from the audience over his treatment by the various characters in the film. In some weird attempt to get them to go along with Moose’s journey and forgive his later actions. However there is no real justification for the performance by Travolta. The movie industry is constantly evolving but the portrayal of autistic characters has not moved forward from Dustin Hoffman in Rain Man. It is certainly a committed performance and one that has to be seen to be believed.

If Durst was serious about having something to say about fandom, the film would have worked better if the character of Moose was simply a regular guy who was pushed too far by the continual rejection of his idol. Making for a darker but richer and more rewarding experience.

It is a shame because there are glimmers of potential to be found here.

Having faded into relative obscurity following his breakout role in Final Destination, Devon Sawa returns looking jacked and like Jeremy Renner’s stunt double. As the object of Moose’s affections, his casting could have been a purposefully meta choice on the part of Durst, because Sawa famously played the role of unhinged superfan Stan in the video for Eminem’s hit song.

Proving himself more than a match for Travolta, he delivers the more layered and textured performance. The final act, a two-hander between Travolta and Sawa, becomes a battle of wills. Exploiting emotional and psychological manipulation against each other, it hints at the possibility of a decent film. However like the Hollywood movies Hunter stars in, it forgoes any level of nuance and subtlety in favour of a climax involving extreme violence.

The Fanatic shoots for the stars. It dreams of being an entertaining thriller and commentary about the dangers of toxic fandom. Unfortunately this is one Hollywood dream that became a nightmare with an end result that is just toxic.

The Fanatic is available to own on Digital 8th June and on DVD 20th July.