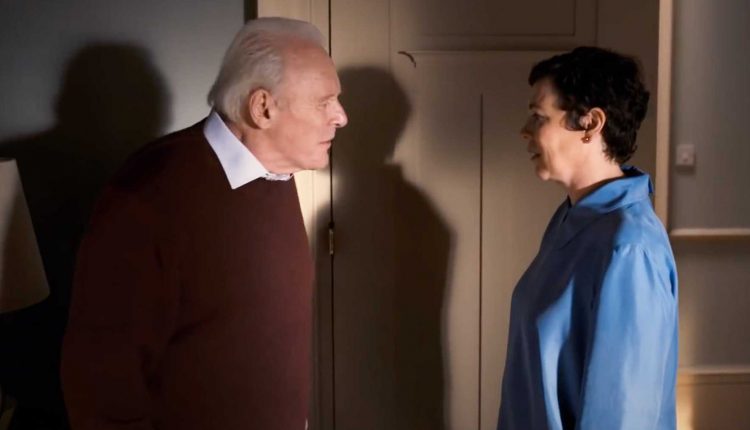 Over the years, Hollywood has given us its fair share of depictions about human tragedy pertaining to regular mental illnesses. We’ve gone from comedy to drama, and we’ve even found ourselves in the romantic comedy territory with themes that riskily toy with mental disorders. The territory of the subgenre is plagued with formulas that don’t change much. An early discovery, an unexpected cure, and a happy ending. The human condition always seems to thrive the threat and the fear of something we have accepted as possible and even as probable. This is where The Father changes the game with an upsetting tone.

Played by Anthony Hopkins, Anthony is an old man who’s constantly visited by his daughter Anne (Olivia Colman). His dementia is chronic – he forgets events, people and important places. Anne is trying to get her father to accept having a caretaker, but he refuses as he says he doesn’t need it.

The next day, something different happens. Anthony is in the company of different strangers who confuse him even more. However, he’s absolutely sure he holds an acceptable level of sanity. Things change around him and time seems to move at a strange pace in his flat. As more days go by, Anne suffers from Anthony’s deterioration as she can only insist on something he doesn’t understand. Everything has an end, and it seems as if she only has to wait for that, even if it represents a horrible outcome for her father, a man who simply can’t physically deal with his own disease.

Directed by newcomer Florian Zeller, The Father is an outstanding piece of work about something as mysterious as the mind when it’s deteriorated. The film’s told from Anthony’s point of view. Imagine if every day, people changed, the place you lived in changed. Imagine if your watch isn’t where you thought you left it. Imagine you don’t remember where. In this collection of frustrations, Zeller composes a dramatic staging that’s nothing short of mesmerizing. The Father only works if you fully digest its cryptic first act. This tricky method won’t work for everyone. It’s a confusing film because it has all the intentions to be one.

Anthony Hopkins has the greatest performance in the last 20 years of his career. Without him, the film wouldn’t be as effective as it is and the puzzle would simply fall apart. His performance represents a descent that nobody else could have tackled in such a realistic and empathic way.

There is also something important about the collaborative screenplay by Zeller and Christopher Hampton. Up until the end, the film stays in this mystifying tone. One almost expects to redeem Anthony’s of his own suffering. We want an outside element to be the culprit. We don’t want to see him suffer anymore.

The Father hits you with the force of an oncoming train and asserts the value of recognizing the reality of something as horrible as dementia. You don’t know if you want the film to stop. Fortunately, there’s no overkill in the film (it’s 97 minutes long). It’s not a melodramatic show about a father and daughter making ends meet. It’s about Florian Zeller’s take on dementia – plain and simple.

As members of the audience, we don’t know if there’s something worse for Anthony. You just want this poor man to stop suffering, to get to a definite point (in time or whatever dimension) and stay there and rest. He only deserves peace.