After Mara’s (Nicola Holt) failed suicide attempt she is haunted by the Ferryman: a supernatural entity that threatens to cause harm to her and those around her.

The Ferryman follows in the footsteps of the recent psychological thriller Unsane, bringing its audience as close to the events as possible by being shot on iPhone. The budget is obviously meagre in comparison, but The Ferryman does benefit from a similar amount of heightened unease that becomes present with this shooting style.

We’re placed in a voyeuristic position, where we feel suitably awkward and misplaced as we listen in on what should be private, emotional conversations between a woman and her recently found father. Disappointingly, these scenes are let down by some clunky dialogue and the overall unconvincing performances from Holt and her on-screen father played by Garth Maunders. 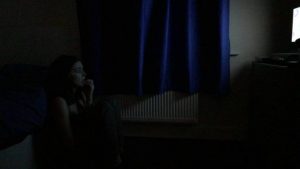 The iPhone shooting does not distract, but instead gives The Ferryman a grittier edge and enhances the threat felt when the Ferryman himself appears on-screen. Although he is certainly not someone you’re going to feel haunted by when you’re drifting off to sleep, it’s impossible not to be chilled by the idea of this sinister presence and the ominous musical leitmotif that accompanies his appearance.

Although Holt puts her all into the role her performance lacks in purity, which is vital for a film that is trying to be as much a horror as an emotional, psychological drama. Perhaps the script can be faulted for its lack of natural dialogue, but there is a definite absence of credibility that makes it near-impossible to fully engage with The Ferryman’s supernatural and real-life horrors.

The Ferryman’s concern with strained relationships, the psychological distress of wishing for death and the frustration that comes with people thinking you’re losing your mind, paves the way for an emotive and complex story. It’s always commendable to see films tackle difficult themes such as these, but again like Unsane, there is something frustrating about the film’s treatment of its leading lady.

Once again, we see an emotionally drained woman struggling and failing to be understood and believed, while her inner fears are manifested in the spooky form of the Ferryman. This has become a cliché in itself and it would have been to The Ferryman’s advantage to bring something entirely new to a genre that is already saturated with such similar stories.

The most worrying part of The Ferryman, however, is how difficult it is to believe that Maunders could play the father of someone presumably in their  ‘20s…

In terms of scares, director Elliot Maguire undoubtedly understands how to craft a film laced with dread, but the Ferryman figure fails to offer anything skin-pricklingly spooky. Although, his unpredictable presence will catch you delightfully off-guard and I am intrigued to see what this young film-maker could do with a bigger budget and a stronger cast.

The Ferryman is flawed, but enjoyable and should be praised for tackling these difficult themes. Despite not offering anything truly meaningful to the conversation of women’s place in society, depression and suicide, it is always a step in the right direction to raise awareness.

THE FERRYMAN from Elliott Maguire on Vimeo.