Have you been wondering exactly what started the great American tradition of The Purge? Then look no further, because The First Purge swoops to the rescue to tell you just that. Sort of.

The First Purge takes things back to the beginning and paints a devastating – but realistic – depiction of modern American in disarray, to show us what lead those New Founding Fathers of America to unleash the Purge night on society. Unemployment is sky-rocketing, violence is taking over, crime is at an all-time high, so what do they do? Let everyone go absolutely mental for one night a year in the hope that the rest of the 364 (or 365 if there’s a Leap Year, obviously) will be crime-free and a time of ultimate tranquility. Crazy isn’t it? 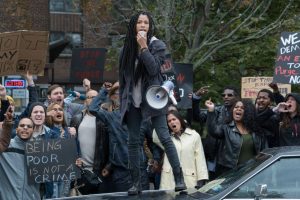 Three Purge films have come before this, so we know that the idea of a night where all crime – including murder – is legal is an absolutely insane idea. What this film needed to do was do something different, because we’ve seen the madness ensue in people’s homes, out in the open and amid a political uprising. We’ve been presented with hyper-real, stylish and blood-drenched murder, coupled with a visual style that is bright and colourful, bursting with slow-motion and scenes that almost glorify the violence we’re being shown. We’ve seen characters who want to wreak havoc as they don their terrifying masks and head to the streets armed to the teeth with guns, bats and knives. We’ve been introduced to those that want to put an end to the Purge’s own reign of terror and will sacrifice their own lives for what they feel is the greater good.

The First Purge proves that we’ve seen all the Purge franchise has to offer and, for that reason, it doesn’t quite manage to satisfy the urge to see something different from this Purge-laden reality. This one is, undoubtedly, the most violent and aggressive of the series, with a skull-crushing sound design cranked up to 1000 to compliment the film’s most fatal moments of knife-wielding mania and explosive gun fights. If you take nothing else from it, The First Purge will definitely leave you with a throbbing headache. It’s an assault on your senses which, I suppose, fits well with a film that is preoccupied with consistent bouts of now-legal crime.

This is equally as slick and stylish as those that have come before, with the streets of Staten Island drenched in neon lights and accompanied by slow-motion and a modern soundtrack. It’s the coolest Purge we’ve seen yet, pressing the franchise into perilous territory as it continues to shine a dangerously positive light on violence, revenge and fun-filled murder. 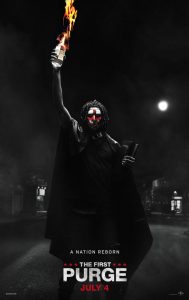 Alas, that is the point of these films, isn’t it? It’s a satirical look at the political climate in America, that pokes fun at the country’s potential for a perilous Purge ruin. The violence is as ironic and hyper-real as the film’s execution and themes themselves; we’re not supposed to like the violence and aggression, we’re supposed to understand that it’s painted negatively, beneath the film’s striking exterior. There’s an ugliness inside and Gerard McMurray (Fruitvale Station) does well to maintain the spirit of the Purge films by following in the footsteps of The Purge‘s founding father director James DeMonaco (The Purge,The Purge: Anarchy, The Purge: Election Year) even if it’s a shame he never truly puts his own stamp on the events that unfold.

As with the film’s previous two sequels and the The Purge that started it all, The First Purge will shock with imagery – for example, a group of police officers pointing their guns at an unarmed black man – so, audience’s can say, “I know what you did there,” but I can’t help but feel that this franchise’s days are numbered. It’s politically tongue-in-cheek message still shines bright, but it’s flame we’ve seen shone for far too long. This one certainly ups the ante with a stronger racial message; it’s easy to spot the film’s reminder that white people are pretty evil, plus there’s a timely obsession with the corruption of government and its hatred for the marginalized. However, unless Universal and Blumhouse can find something else to teach us – other than that America is doomed and politics is bad – then the novelty of this series’ glamorous brutality is sure to wear off.

All in all, if you’ve loved purging up until Election Year, then you’re sure to love The First Purge, too. The reasons being are bittersweet; it’s still the same glitzy nightmare as it’s always been, but is that really a good thing?