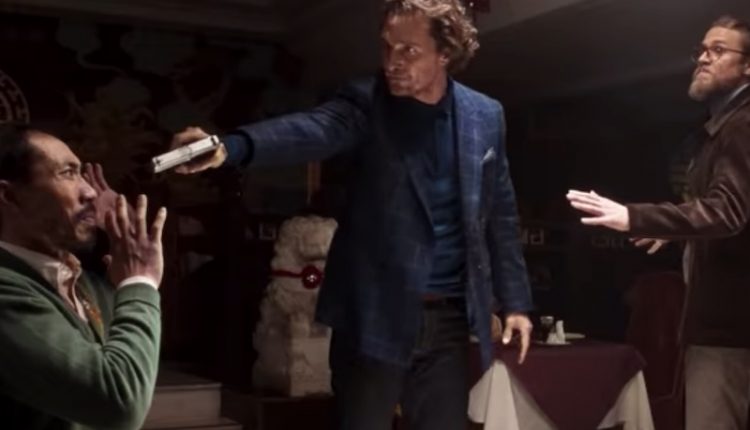 Following on from this year’s Aladdin, Guy Ritchie returns to his crime-comedy roots for his latest feature The Gentlemen. Starring an ensemble cast, it follows cannabis crime lord Mickey Pearson (Matthew McConaughey), who’s planning to cash out his empire. However, this starts a series of schemes and backstabbing.

When Lock, Stock and Two Smoking Barrels was released in 1998, Ritchie’s gritty style brought him critical acclaim. The Gentlemen feels like him revisiting his glory days but after more than 20 years, his blunt approach is now stale. In fact, the film’s in-jokes and slurs only make him a British imitation of Tarantino.

Despite this, Ritchie doesn’t defer to cultural stereotypes so the slurs don’t come across as offensive. Instead, they tie into the character development of journalist Fletcher (Hugh Grant), whose flamboyant storytelling skills add flourish to the film’s core mystery. Notably, the story of who’s going to be the next Mickey Pearson.

With the film’s inconsistent tone distorting Ritchie’s direction, the unreliable narrative offers an unstable foundation for the story. The film’s messy pacing prevents the necessary intrigue and interest to emotionally invest in Mickey, as well as supporting characters such as Mickey’s wife Rosalind (Michelle Dockery) and cannabis dealer Matthew Berger (Jeremy Strong). As a result, there is a surplus of characters in ultimately redundant subplots.

Cast-wise, McConaughey comes across as a tame gangster, who has been gentrified through his business. Despite his reputation, he isn’t an intimidating character – in fact, Charlie Hunnam is more menacing as quiet, sophisticated enforcer Raymond. Farrell, Dockery and Henry Golding offer solid performances, but Grant steals the show as Fletcher AKA the dodgy Cockney.

With such an eclectic cast, The Gentlemen has the components of an entertaining gangster film. It is as chaotic, sharp and foul-mouthed as Ritchie’s stronger work but its inconsistencies prevent it from being brilliant.