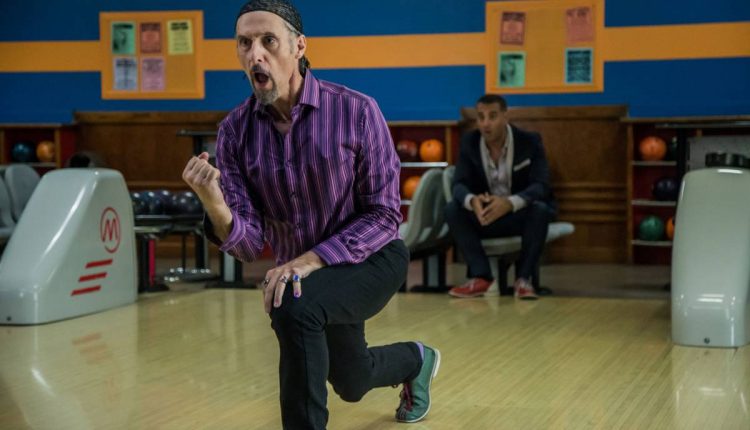 One would automatically think that the collaborative efforts of noted The Big Lebowski associates Ethan and Joel Coen as well as supporting actor John Turturro would bring some convincing irreverence to the imagined makeshift sequel-of-sorts The Jesus Rolls. After all, the Coen Brothers’ infectiously off-kilter vision and Turturro’s freakish oddball Jesus Quintana as felonious ace bowler Jesus Quintana certainly contributed to the subversive vibe that made The Big Lebowski the late nineties cult classic cockeyed comedy that it ultimately became in its wayward cheeky spirit. However, The Jesus Rolls throws a gutterball down the farcical greasy lane in an unimaginative sex buddy road flick where the thin-layered juvenile raunchiness is a strikeout of the unwanted kind.

As director and co-writer, Turturro (along with fellow scribers Bertrand Blier and the Coens) enthusiastically revisits his heavy-accented, hairnet-wearing, sleazy Latin Lothario bowling sensation Jesus and centers an aching 85-minute stretch of manufactured male-bonding messiness that never quite approaches the inspired madness that resonated so impishly in the aforementioned Lebowski. What made Turturro’s Jesus such an eye-rolling tool was his offbeat character’s brief but boastful ability to be part of the chewy scenery of aimless lunacy that accompanied the Coens’ decorative nuttiness in a slaphappy, cynical romp. The sex-offending law-breaker in the Turturro-directed The Jesus Rolls feels too broad and confining for his obnoxious bowling bully to show any convincing smarmy appeal on his own accord away from the surreal Lebowski landscape.

Thus, Lebowski side character Jesus Quintana is about to embark on a so-called elaborate quirky quest upon his release from prison. Jesus is reunited with his criminal sidekick Petey (Bobby Cannavale). Soon, the ex-jailbirds are joined by their feminine pal Marie (“Amelie’s” Audrey Tautou). Together, the troublesome trio raise some havoc as they hit the road and happen to partake in several crime sprees. From a personality standpoint we see that Jesus’ soured reputation for been a notorious lewd ladies’ man does not quite have the unfavorable sexual deviance as believed. In fact, Jesus is more of a rascal-minded Romeo than he was a hostile sexual predator…or at least this is the spin anyway. Essentially, Jesus Quintana is a carnal-loving cad of a thief whose only true guilt is loving the ladies hard and skipping ahead of the authorities ever harder.

There is not much of any meaty mockery to chew on in The Jesus Rolls. Turturro’s bad boy Jesus simply does not have the unctuous charm to arm this sketchy on-the-road dud that occasionally crackles with intermittent wit. The suggested wackiness is never fully digested with any sense of colorful purpose. While Turturro’s Jesus registers as a walking off-the-cuff gimmick Cannavale’s Petey is basically another second banana holdover that he has countlessly been relegated to portraying from gangster epics such as Scarface to poignant character study gems as witnessed in the criminally underrated The Station Agent. French cinema darling Tautou, in a rare English-speaking role, is reduced to playing a bed-hopping tart with a dizzy-minded demeanor.

Graciously, Turturro’s peppers his film with a who’s who of notables that are on board to share in the minimal chuckles–Christopher Walken, Susan Sarandon, Jon Hamm, Sonja Braga, Gloria Reuben, Pete Davidson, etc. Still, overstuffing the proceedings with random personalities joined at the hip in seeking sex, committing crimes, plotting revenge and roaming the highways deems The Jesus Rolls as a poor man’s retread of Going Places.

In The Big Lebowski, Turturro’s thick-accented bowling pins playboy took us on a topsy-turvy trip in a limited dosage of welcomed weirdness. It is too bad that Turturro’s alter ego Jesus Quintana’s and his crooked carefree cohorts’ disjointed joyride is a tripe travel towards nothing particularly special in the usual Coen canvas of crafty chaos.