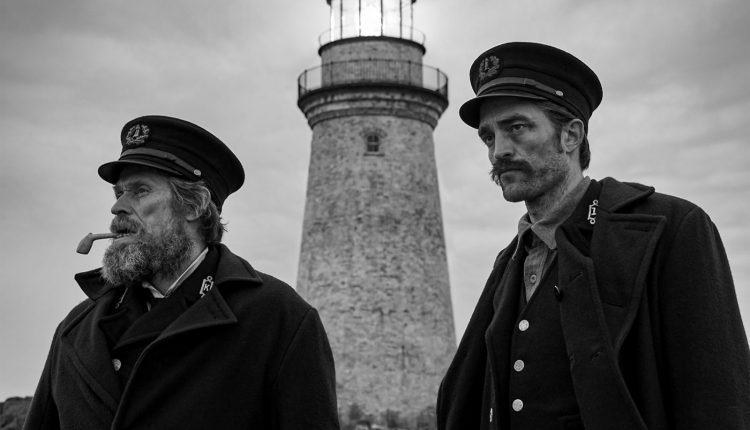 Robert Pattinson and Willem Dafoe wave goodbye to their sanity inside The Lighthouse, Robert Eggers’ follow up to The VVitch.

A lighthouse serves two primary functions. A navigational tool for seafarers who had lost their way and a warning to ships there were dangers ahead.

Ironically for lighthouse keepers (or “wickies”) Wake (Dafoe) and Winslow (Pattinson), it is inside this oceanic obelisk that they will lose their own way to the dark dangers that lie buried deep.

After initial misgivings, an uneasy and fragile alliance forms between the hard-drinking, weathered, salty old sea dog and his quiet underling who wants nothing more than to get on with the job. And the opportunity to tend the mythical lamp. Of which, Wake seems oddly overprotective and calls to both men like a siren’s song.

When a storm hits the island, they are stranded for an indefinite period of time to try and weather it out. Any semblance of trust is washed away like sand from the shore as cabin fever eats away at them.

Imagine the episode of The Simpsons where Homer and Mr. Burns are snowbound together. But with more seagulls and mermaid vaginas…

This is another “elevated horror” hit from A24, following in the footsteps of Hereditary and Midsommar but it is also a comedy as black as the ocean floor.

Dafoe has a face that is perfect for black and white. The whites of his eyes gleaming from the shadows like the beam that adorns the fabled lighthouse. He effortlessly switches between calm and ferocious like the sea, a raging swirl of emotions.

Pattinson initially has the less showy role but as the cracks begin to appear, his frustration and rage blow harder than a category 5 gale. Whether that be screaming about “yer goddamn farts!” or spouting quotable insults as “you smell like curdled foreskin!”. He provides further proof that he is one of the finest actors of his generation and this will banish any thoughts of Twilight far from your mind.

Eggers’s talent shines brighter than the bulb that lives above the Wickies heads. His decision to shoot in harsh, stark black and white cinematography, along with the impeccable sound design and thundering score from Mark Korven, puts the audience right in the eye of the impending storm (literal and metaphorical). You can almost taste the salt in the air and smell the sea breeze. It is the first A24 film that would benefit from a 4DX screening!

The Lighthouse will draw audiences in with its siren’s song and leave them breathless and broken against the rocks with images that will stay with you like the ships trapped in Davy Jones’s locker.