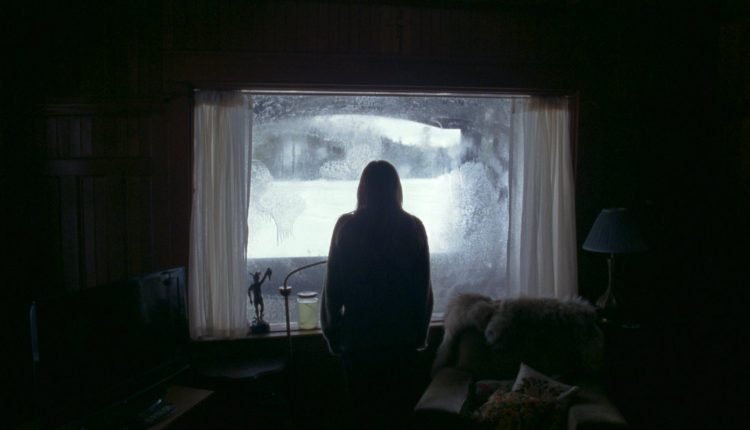 Similar to Vivarium, which also premiered at the 2019 London Film Festival, The Lodge is the latest horror to become unwittingly prescient about the dangers of self-isolating with family!

Recently divorced from their mother, Richard (Richard Armitage) takes his two children to the aforementioned lodge for a holiday so they can meet and bond with his new fiancee Grace (Riley Keough). To begin, the atmosphere is as frosty as the weather outside but the relationship between the three slowly thaws. However when Richard is called away on business, demons from Grace’s past appear to manifest. Causing cracks in her sanity that are as dangerous as ones on the icy lake outside.

This film has arrived at the perfect moment. Building on our fears of being stuck with someone that we don’t want there, like or even know that well.

The kids have done their due diligence with the new stepmom-to-be and Googled Grace prior to the trip, discovering she was the only apparent survivor of a death cult. Are the mysterious happenings at the lodge linked to her past? Is the cult still out there? Is she mentally unstable or is there a malevolent presence in the house?

Goodnight Mommy writer-directors Veronika Franz & Severin Fiala keep their cards close to their chest. Keeping the audience in the dark as much as the characters which helps to build a real sense of creeping dread and tension. One that they refuse to shatter by resorting to cheap jump scares.

They make great use of space. Increasing the sense of unease and claustrophobia through tight cinematography, shot through a cold, muted colour palette.

The film’s biggest strength however lies in the performance of Riley Keough as Grace. Riley Keough is an indie star on the rise. Having featured in small but pivotal turns in the likes of American Honey and Under The Silver Lake, this film gives her her breakout role.

The film starts from the perspective of the children. Unsure of this new woman entering their lives, Grace is initially only glimpse in the corner of the frame or in a rear view mirror. It is only once they arrive at the lodge that she comes into focus and the focus of the story slowly transitions to her journey in confronting her past. It could have been easy for Keough to overplay the stereotypical nasty, new stepmom but she exudes a fragility and warmth that makes her sympathetic to audiences. Yet at the same time, able to hint and tap into a deep well of darkness within.

That well runneth over in the third act as plot threads come together to form a rich tapestry of tragedy.

It has echoes of Hereditary. The fractured family dynamic, the unstable maternal figure and use of dolls and miniatures. Yet this is a different beast entirely and goes to even darker places of the human psyche.

The Lodge is one of the most effective chillers of the year. It presents images that will lodge themselves in your mind long after you leave the cinema. Or turn the TV off in your own home!