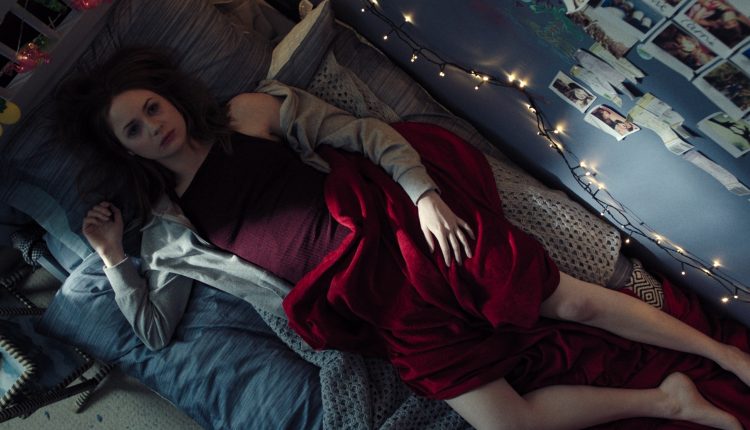 The party is finally beginning for Karen Gillan’s directorial debut The Party’s Just Beginning. It premiered at the Glasgow Film Festival in 2018 however with its focus on the issue of men’s mental health, it has become more timely and relevant as it arrives in cinemas and streaming.

The film is written and directed by Gillan which is also set in her home town of Inverness, Scotland. It follows Liusaidh (Gillan) as she struggles to cope a year on from the suicide of her best friend.

It is tough subject matter for a first feature but she tackles it head on. Looking at the difficulty many men have speaking out about their feelings and emotions, plus the void that those left behind may find impossible to navigate.

After three series of Doctor Who it is fair to say that Karen Gillan is no stranger to time travel. Her character Liusaidh is stuck in a time loop herself, trapped in her own grief-fuelled Groundhog Day. Every day is the same for her. Less Eat, Sleep, Rave, Repeat. More Eat Chips, Drink, Sex, Repeat.

The look of the film, and Inverness, with its muted, washed-out colours reflects the main character’s depression. Ironically, the film then comes alive with energy and vibrancy as she attempts to shut out life around her through drink, drugs and meaningless sex.

Gillan shows real talent as a director. She has already directed a couple of short films including a horror called Conventional. She has an ability to capture mood and craft a sense of dread and horror. For example in a sequence where she is haunted by the spectres of those around who have committed suicide.

As an actor herself, she is adept at knowing what fellow actors need from a director. Thus she is able to draw affecting performances from her cast including Guardians co-star Lee Pace and Matthew Beard as her best friend Alistair.

Her talent in front of the camera is already well known but the film reveals genuine talent behind it as well. It seems like The Party’s Just Beginning for Karen Gillan’s career as a writer and director.