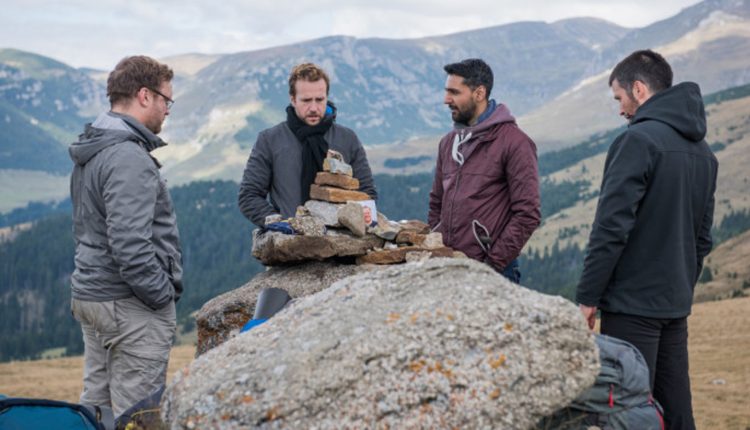 When you throw four friends, dense woodland and a trip to the Swedish wilderness into the pot what do you get? A mish-mash of clichéd horror plots from movies past with a splash of humour and intricate detail in director David Bruckner’s vastly entertaining The Ritual, but it all just seems a little too familiar for the seasoned horror fanatic.

Rafe Spall takes the charge as Luke, the cowardly friend who hid behind a shelving unit during a shop robbery which saw the fifth member of the longtime friends murdered in cold blood. A year later in honour of their fallen friend the remaining four consisting of Spall, Robert James-Collier, Arsher Ali and Sam Troughton take a tribute hiking trip to Sweden. Tired, out of their comfort zone and feeling their age, the men decide to take a shortcut through a dense looking forest to cut down the time it takes to get back to the pub so they can put their feet up and enjoy their creature comforts, but from the moment they enter the woods something isn’t quite right.

Lost, hungry and tired, tensions start to mount amongst the group, Spall full of guilt and shame for not helping his dead friend is plagued with flashbacks and blames himself and even if at first they don’t admit it to his face so do the rest of them. As the darkness of the night soon approaches and rain lashes down upon them they encounter a cabin in the woods to take shelter in for the night – As they discover cult-like wooden doll artefacts hanging from the ceiling and wooden ritual stature the plot unravels quickly in the mind of the viewer. Scared, the men settle down for the night only to be plagued with nightmares but they survive the night.

Bruckner has thrown in a few very effective jump scares as well as the staple cult, monster and picking off of the group one by one, making it obvious which one of the group is going to meet their most horrendous fate next, Think Blair Witch and you are on the right track. On the surface of this recognizable canvas is a straightforward horror but if you dig deep enough, it’s not that fair down is all the hallmarks of a psychological thriller that make up the narrative with issues of guilt and grief at the forefront.

Through the disguise of darkness the Monster lurks and we never get to feast our eyes on the creative beast until the very end, this doesn’t make it’s gloriously gruesome killings any less effective, less is more in this case and it only enhances an otherwise formulaic story with some fantastic performances from the cast and some well-shot scenes of mayhem.

Its unoriginality is its only downfall, a cleverly written plot with something we haven’t seen numerous times before would have rounded this picture out with some guts and glory, instead we get witty whimper of a screamer.

The Ritual is out in cinemas October 13th.