Rachel Shenton’s heartfelt tale of a profoundly deaf child who is struggling to communicate is brought to life by Director Chris Overton. Writer and Actress Rachel Shenton (Switched at Birth) stars in The Silent Child (2017), alongside newcomer Maisie Sly and Rachel Fielding (Secret Diary of a Call Girl).

As the film opens, the decision to have rural England shielded behind a wall of blinding fog works remarkably well; the audience loses their sense of sight whilst centred on Libby (Maisie Sly), a profoundly deaf girl and it adds a layer of uneasy experience. The fog, coupled with dreary conditions, contrast greatly with Joanne (Rachel Shenton) riding an old bike while wearing a vivid red coat – such great visualisation.  It’s a poignant metaphor for Libby’s life – Joanne (a newly appointed social worker) appears to be the only ray of light piercing through the dense fog of her life.

Many issues are raised in the film but none more so prominent than the plight of children suffering oblivious, uninformed decisions which veer on the edge of neglect. Libby’s mother, Sue (Rachel Fielding), is at the forefront of these damning, life-changing decisions about her daughter. The Silent Child is littered with so many examples: talking out of Libby’s eye-sight, focusing on the siblings’ achievements (we learn about Seb’s looming G.C.S.E’s and Pip’s ballet), the rudeness of answering a phone mid-conversation about Libby’s future – so many things which frustrate and anger: “Sometimes we don’t even know what’s wrong with her.”

Sure to tug on the heartstrings of anyone who watches, the lack of attention Libby receives is incredible; most notable in a completely silent scene showing the whole family around the dinner table. Watching the exchanges but not comprehending them, the audience suffers a representation of what it must be like to be profoundly deaf.  Alone, this scene packs such a kick to the heart, a box of tissues is a must. Within this film…well, let’s just say its impact doesn’t diminish the more you watch it.

Children are fantastic – they see life in such a beautiful, honest way. Signing “My ears are broken,” before instantly plodding on with life while Joanne struggles to hide her emotion, reveals just how much Libby does understand about herself and the knowledge that life just isn’t that fair. 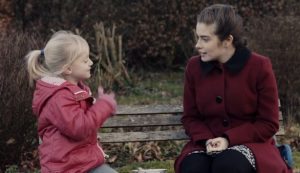 Libby must have endured many situations like this in her short life so far and it is one talent of this film to actually demand you think about and imagine what Libby’s life was like before the film: all of the hardships and disengagement suffered – her character is that believable. Given this is Maisie’s first acting role, she performs perfectly and owns the character. Without her deliberate facial expressions, the character would not be anywhere near as engaging.

Back to the fog, used metaphorically to represent Libby’s life, the absence of it underpins the positive effect Joanne has with Libby; most certainly her sunshine to disperse the fog. Over the emotionally-loaded nineteen minutes, the two characters impart such dynamic emotions which link beautifully to what is visually represented: once Libby has started to communicate (her face literally transforms into one of iconic emotion) the fog vanishes, music swells. But then regrettably, the fog returns: Libby becomes the shell of a child once more. To compound matters, even worse is that final scene.

Wow. Talk about a complete metaphor for how Libby and Joanne feel at the end – the pure message exchanged between the two while at school should not leave ‘a dry eye in the house’.

This is a must-see short film that you simply will not regret watching – spread the message, spread the word, break that deafening silence.

Nothing can sum up this film’s dire message more than the phone exchange between Sue and Joanne:

The Silent Child (2017) has won over twenty awards since its world premiere at Rhode Island International Film Festival and has now been shortlisted for an Academy Award.