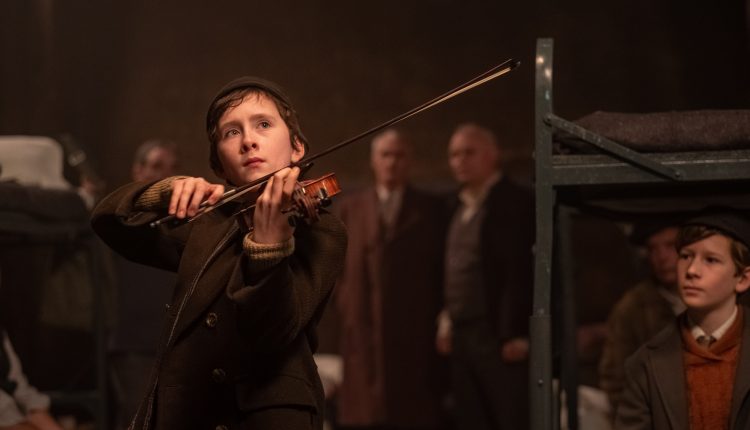 Filmmaking is fluid. Some films utilize music as the basis for its narrative, while others don’t utilize a score at all. Portrait of a Lady on Fire doesn’t need a score just as much as The Song of Names finds importance in one. And director François Girard is no stranger to films imbued with melody. His film Boychoir is, as the title suggests, all about a choir of young boys, and his film The Red Violin is all about a read violin passed down generation to generation. The French-Canadian director is familiar with the language of classical music, so it’s fitting that The Song of Names, a story about a young violin prodigy, is his latest feature.

Based on the novel of the same name by Norman Lebrecht, The Song of Names is a film about friendship, betrayal and faith. It’s an intimate story of brotherhood in the midst of war and an ode to Polish Jews through the film’s moving and impassioned score. The film takes place over thirty-five years, moving back and forth in an effectively executed way, as the childhood and adulthood of the film’s main duo are explored. Shortly before World War II, Martin (Misha Handley) suddenly finds himself no longer an only child when his music publisher father, Gilbert (Stanley Townsend), invites a young Jewish violin prodigy from Poland, Dovidl (Luke Doyle), to live with them in London so he can harness his full musical potential.

At first, Martin is unwelcoming towards the immigrant now sharing his room, but the two bond quickly, with Martin feeling compassionate towards Dovidl who is worried over the fate of his family in invaded Warsaw. They become both brothers and best friends, but this brotherhood ends when Dovidl disappears shortly before his debut concert. Thirty-five years later, Martin (Tim Roth) discovers that Dovidl (Clive Owen) is still alive, and sets out on a search to find his brother and learn the truth behind why he left.

The Song of Names was the first film to receive permission to shoot at the Treblinka memorial. Treblinka was an extermination camp built by the Nazis near Warsaw to rid the country of Jews. Hundreds of thousands of Polish Jews lost their lives in the camp and the core of the film’s story are those very souls. The “Song of Names” is a song created for the film – a recitation of the names of all who died at Treblinka. It’s set to music and some of it is sung in the film by a Rebbe, and this song is how Dovidl learns of his family’s fate. The “Song of Names” is sung like a prayer and makes for a chilling scene you won’t soon forget. Dovidl sets the song to music and plays the violin theme in the film, which is original work by composer Howard Shore. It would be a shame to look past Shore’s work come awards season.

A real treat when watching the film, while flashing back and forth three decades, is seeing how the young cast matches their adult counterparts perfectly. It almost feels like you’re watching Roth and Owen’s real younger selves Boyhood style. Handley, Roth, and Gerran Howell, who plays young adult Martin, are given a character who grew up feeling second best. Handley portrays a Martin that is both incredibly jealous and devoted to his brother, while Howell and Roth play a Martin that feels betrayed by Dovidl. It’s a life of emotional struggles, for which all three actors play as though they are one.

But there’s no denying that Doyle, Owen, and Jonah Hauer-King have the most interesting character in Dovidl. Doyle, who plays young Dovidl, is a violin prodigy himself, but unlike the other actors he shares the part with, he had no acting experience. But already being in tune with his emotions as a violinist, he is able to nail the emotions needed to play a young boy separated from his family. Having to go through extensive training, Owen and Hauer-King both play the violin like masters, and it feels like they really are playing the music heard in the film – that credit goes to Ray Chen. While Doyle is excellent, the complexities of the character don’t take shape until Hauer-King is handed the violin as young adult Dovidl. This is where he begins to struggle with his Jewish faith; a faith he feels has abandoned him, but one that also eventually saves him. He goes through an emotional turning point for which Hauer-King stuns. Dovidl also happens to be the best turn for Owen in a long time; an actor that has fallen off the radar somewhat, but he proves here why he shouldn’t be.

The Song of Names is an amazing film in so many ways, but it doesn’t hit all the right notes. The best moments of the film live with Martin and Dovidl when they’re young, but the investigative element that is introduced in their character’s later years is too tame. Martin’s search for his brother is almost uninteresting and, ultimately, doesn’t produce the desired emotional punch. Another drawback is in the film’s dialogue. If you’re unaccustomed to hearing a Polish accent, much of what is being exchanged gets lost. It’s a film best watched with subtitles.

Girard proves once again that he’s a master of music. By weaving both original compositions and classic works flawlessly into the film, The Song of Names becomes a solemn reflection on war and a lost brotherhood.

The film was viewed at the Edmonton International Film Festival.