In news that may or may not surprise you, The Strangers: Prey at Night is actually a decent and scary follow-up to 2008’s The Strangers. It’s undoubtedly not entirely worth the decade-long wait, but fans of the first film should be glad to know that Dollface and co. are just as relentless and nasty this time around.

The film’s plot is simple and follows a family’s stay at a quiet trailer park, only to be interrupted by 3 familiar masked faces. The film wastes no time in wreaking its slasher terror, quickly setting up an eerie tone as a young woman knocks on the door to ask if “Tanner” is home. “Is she lost?” the family wonders. Nope, she knows exactly where she is. 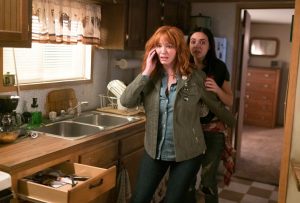 It’s all downhill – for them, anyway (great for us!) – as the night escalates into a manic and non-stop journey of survival. Although it doesn’t feature any truly iconic kills like its classic slasher predecessors Halloween and Friday the 13th, there are a couple of brilliant, entertaining moments that nicely pay homage to the ‘80s and its serial killer-thriller supremacy. I challenge you to not, at least, enjoy one particular scene that involves a confrontation in a swimming pool set to the powerful tones of Bonnie Tyler’s Total Eclipse of the Heart. Combined with the neon lighting around the pool and the contrasting pitch-black night, it makes for a devilishly dramatic and edge-of-your-seat moment.

Prey at Night is definitely at its best when it abandons all its mushy sentimentality and gets down to the killer good stuff.

Prey at Night is definitely at its best when it abandons all its mushy sentimentality and gets down to the killer good stuff. The initial set-up of the parents – played by Christina Hendricks (Mad Men, Drive, Lost River) and Martin Henderson (Everest, Grey’s Anatomy) – dealing with their troubled, tearaway teen Kinsey (Bailee Madison) is too clichéd. Far too many times we have seen this plot device lead to an eventual and probably bittersweet, familial reconciliation. It’s a hollow and conspicuous attempt at encouraging the audience to emotionally attach to these characters and you’ll see right through it.

Prey at Night is a grisly and violent follow-up to The Strangers. With gruesome kills and a suitably dynamic soundtrack; it’s ferociously entertaining and you’ll be glad to see the return of the terrifying masked trio. “Why do they do it?” you ask. Why not?