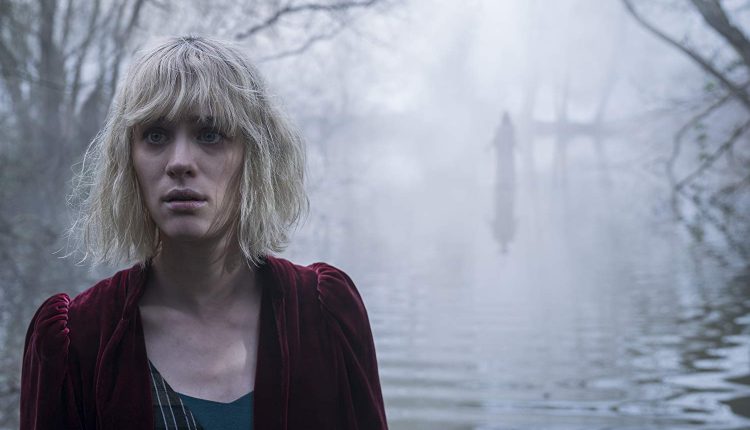 The year is 1994. Pulp Fiction would soon have cult status; “Love is All Around” by Wet Wet Wet is number one on the charts; Oasis releases their first album; the PlayStation makes its debut; Diana takes her revenge with that dress; VHS tapes, cassettes, and Kurt Cobain is dead. The ’90s felt like rock n’ roll rebellion, and director Floria Sigismondi revisits this era in her latest film, The Turning.

Based on The Turn of the Screw by Henry James, the film follows Kate (Mackenzie Davis) who takes a job as a governess at a mysterious, grand estate with a sweeping garden that seems to go on forever, a koi pond, and a maze (we all know we’re in for some trouble when there’s a maze). Her job is to take care of two orphans, Flora (Brooklynn Prince) and Miles (Finn Wolfhard), whose parents died in a car accident. Having witnessed the tragedy that occurred just outside the manor’s gates, Flora is too afraid to leave the property for fear of dying. At first, believing she is only the governess to one child, Kate says, “I’m going from 25 screaming kids to just one. How hard can it be?” She’ll soon come to regret those words as horrors and secrets await her.

As the director of The Runaways, it’s no surprise that music would be a big inspiration as to why her film turns a horror novella from 1898 and adapts it as a haunted house thriller set in the 1990s. In an interview, Sigismondi states that the ’90s have a “rebellious, angsty quality to it” that perfectly fits the character of Miles. He’s a teenage boy with a love of rock n’ roll and a violent streak. As Sigismondi herself says, he’s the kind of kid that looks like he’d have a Cobain poster on his wall.

The Turning is a ghost story that centres around two spirits in particular: Miss Jessel (Denna Thomsen), who was the governess before Kate, and Peter Quint (Niall Greig Fulton), the former stablehand. Jessel was a mother figure to Flora, just as Quint was a father figure to Miles. And while the housekeeper, Mrs. Grose (Barbara Marten), hints at a relationship between the two, Kate learns that it’s much darker than that. The truth imbues the film with a feeling of toxic masculinity, one that affects Miles and his antagonistic attitude towards Kate. This illustrates how toxic masculinity is a cycle that is passed down and taught. In the preface of his final ghost story, The Jolly Corner, James stated that he prefers his ghosts to be extensions of everyday reality. Toxic masculinity, abuse, and harassment is certainly a reality for women, but the film also shows the bravery and solidarity between women in the face of that reality through the bond that grows between Kate and Flora.

Both spirits haunt Kate, but she is harassed by Quint, whose abusive nature takes a grave psychological toll on Kate as this haunting intensifies. This is all frightening in and of itself, but there’s no doubt that Miles is definitely scarier than any ghost. He’s so unpredictable, with a look in his eye that’s very Damien from The Omen. He wears Quint’s sweater, shows no respect for female authority, and creates a psychosexual dynamic between himself and Kate. It’s a dynamic that’s reflected in another adaptation of James’ work, The Innocents (1961), however to a more uncomfortable degree. A look at The Innocents’ take on James’ novella offers somewhat of an explanation for The Turning‘s ambiguous ending.

The Innocents is a pretty straightforward take on the source material. The ghosts are real, the governess, is in fact, being terrorized by them, and the children are being influenced by them. (Critics at the time argued that the spirits, in this case, were just a product of the governess’s “problematic sexuality.” If you’re gay, you see dead people?) When it comes to interpretations of the source material, critics have long questioned the authenticity of the spirits. Because the story is told through the governess’s point of view, many believe that the spirits are a product of her imagination. While James never indicated that his story was anything other than just a straightforward horror tale, critics have loved toying with possibility; and that is exactly what Sigismondi and screenwriters, Carey W. Hayes and Chad Hayes, do.

In an interview, the director states that she likes how you can interpret James’ work in different ways. “You can read it as a ghost story and then you strip that away and you read it as a woman’s descent into madness,” she says. For the most part, The Turning is a straightforward narrative. It doesn’t bring anything new to the genre, but it has everything a good ghost story needs: a great cast, the foreboding atmosphere, a score of shrill strings, disembodied voices, apparitions, and jump scares. The scares aren’t so frequent that they seem overdone either. They’re spaced out, and the apparitions of these spirits are incredibly effective in making the audience believe that Kate is living a nightmare. It’s a stylish horror film from its production design to its cinematography, which incorporates some really cool shots using a pupil as a lens.

It’s a good, really solid film…until it’s not. The ambiguous ending has really stumped a lot of critics and audiences. Sigismondi flips the cards completely at the last minute, almost like she was going in the linear route and suddenly decided to leave the film up to interpretation. Its execution is so rushed that it feels like a bunch of cuts with nowhere to go just got edited at the end and they called it a day. And if there’s any kind of message at all (about hereditary mental illness? a trauma in Kate’s past that’s not explained?) it’s lost completely.

Everything is just so well done before the conclusion that it’s hard to come out of it without feeling somewhat satisfied, especially with such a talented trio. With his talents on display in Stranger Things and the It franchise, Wolfhard is made for genre films like this. And Prince – the girl can do anything can’t she? She stole all our hearts with her performance in The Florida Project, and again with her directorial debut, Colours. While The Turning doesn’t afford her the same kind of depth as her character in The Florida Project did, she still manages to impress. Last, but not least, is Davis who just keeps getting better and better in every role. She already learned the ropes at being a nanny in Tully – another film which also throws the audience a curveball – but her character is framed in a very interesting way here. When we first see her she’s happy, dressed in bold, optimistic about her new job. She’s framed wide, but as the film progresses, the camera grows closer, claustrophobic, almost like she’s suffocating under the weight of this terror. Everything seems to lose colour, too. The technical choices are really where the film excels.

Sigismondi makes this classic work fresh with her new themes of generational abuse, and how this toxic behaviour affects women mentally and physically. The Turning could have succeeded as just your standard horror fare, but instead, it tries to impress us with a twist like The Others (2001), but, unfortunately, not everyone can execute that so flawlessly.