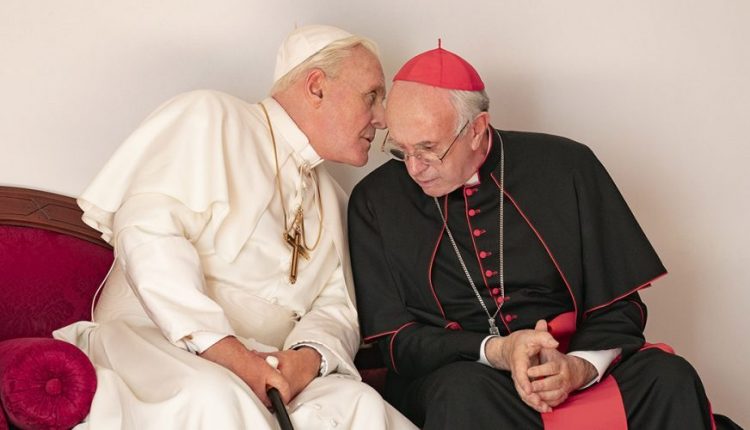 Everyone was talking about Pope Francis this week after a video showed him batting at the hand of a pilgrim who grabbed him during an event. As thousands of news articles show, we are obsessed with the Pope, so what better than a film which explores the real-life events unfolding behind the closed doors of the Vatican?

The screenplay by Anthony McCarten, who boasts writing credits for Darkest Hour and Bohemian Rhapsody, is what carries the film, guiding us through long and should-be boring theological debates between the two men. With a pinballing chronology, the script begins with the 2005 papal election, utilising time jumps and flashbacks to reveal character and keep the story moving. Fittingly for Catholicism, the narrative is rather dualist, framing Benedict as the old and Francis as the new. The film heavily focuses on Francis, while Benedict’s life and character go mostly unexplored, and furthermore, the script glosses over touchstone issues such as child abuse within the Church, at times leaving the audience with only half the story. Despite this, the script doesn’t shy away from controversial political and religious questions.

The Two Popes is shot like a documentary with an invisible cameraman, with a handheld view and its fair share of zooms, giving it an intimacy and light-heartedness unconventional of the Vatican. This, alongside excellent performances by Hopkins and Pryce, help make the story convincing and especially empathic.

Mirroring the meeting of Francis’ progressive views and Benedict’s traditionalism, the film juxtaposes the grand with the mundane. Masterful set recreations showcase the age-old opulence and ritual of the Vatican, as well as stunning iconographic visuals placed alongside TV news broadcasts, smartwatches and Fanta, creating moments that evoke both humour and reflection.

With the second series of The Young Pope starting 12th January in the UK, it seems our current fascination with the papacy is set to continue, but as The Two Popes demonstrates, we appear more interested in the people behind the behemoth of Catholicism than the institution itself.