Okay, so at the moment it might feel like a stretch, but the latter one may not be quite so odd or out in a year or so. Within the first two minutes of Dan Bush’s The Vault, there’s a moment that evokes Tarantino and Wright which immediately positions the film head and shoulders above other modern horrors: an opening credit sequence. It may sound trivial, but as Tarantino once advised Wright, an opening credit sequence builds anticipation and brands the films as an event in itself. No pressure then.

Part heist movie, part horror, The Vault finds a slapdash stick-up crew getting caught with their trousers down when there’s less money in the vault but more than they bargained for in the basement. After the opening and credit sequences depict a mid-robbery 911 call and corpses piling up, we’re straight into the bank queue. During which, each character is skillfully created through the crew members’ fronts and cover stories, leaving them feeling thought through and well-rounded. The main characters are painted in shades of grey instead of black and white, allowing the viewer’s allegiances and sympathies free to flit back and forth, never more so than when it’s revealed their actions are not motivated by avarice, but by altruism.

The central casts’ performances also add texture to these characters, especially bank robbing sisters Vee and Leah. Just as bellicose as the early season version of her Orange is the New Black character, Taryn Manning’s Vee is quick to throw a punch and willing to use brass-knucks as added punctuation. Francesca Eastwood’s performance contributes to her Leading Actor CV and will hopefully see her take on some other worthy roles. As for James Franco? It’s a refreshing change to see him understated and with his trademark charm and GIF-worthy grin replaced with an impressive pornstache instead. 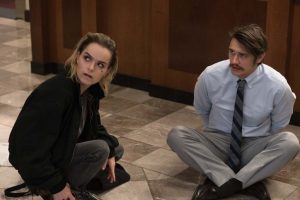 So, half an hour in and the heist’s gone pear-shaped, tempers have been frayed and things start to get spooky. After a build more stressful than an IRL bank queue and with curiosity of the big bad suitably piqued, there was fear that it may shit the bed. And then it does.

Thankfully, it’s only a shart. When the action moves from the creepy underground vault and back into the bank, the viewer’s left like a Chilean miner, having squinted trying to make out what’s actually cracking off and who’s attacking whom. Yes, less is more and the imagination is scarier than the familiar, but when Vee’s radioing her doomed colleague asking “What’re you lookin’ at?”, the audience is asking the same thing. When the viewer finally does see what they’re looking at though, it’s shockingly gruesome: tapping into a Video Nasty vibe and Abel Ferrara’s Driller Killer in particular. Jump scares are largely swapped for the psychological and the unsettling, so much so that a comparison to Silent Hill seems apposite. The game. Not the film.

Sadly, then you blink and it’s all over; we’re whisked away to after the event to see who’s survived and what’s left of them. It’s frustrating to those who’ve invested so much. But again, less is more. A twist is sign-posted from the start (and the trailer tbh) and although it aims for a swerve worth dropping your Kobayashi mug for, it would have arguably been more effective to stick to the obvious.

But hey, Tarantino and Wright aren’t ones to stick to the obvious. Why play it safe?

The Vault is in cinemas and on iTunes & digital HD from 8th September.

Black Cinema that woke up America