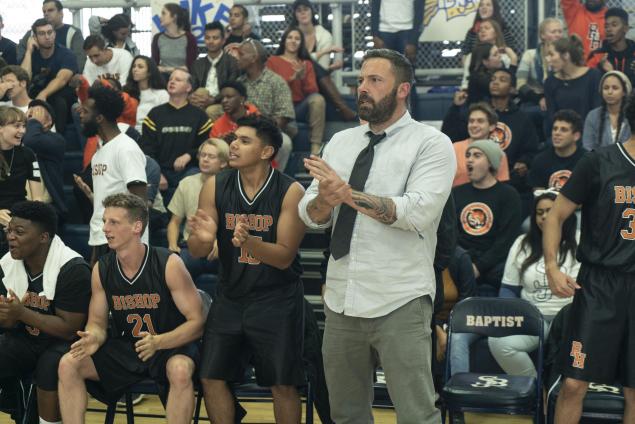 Redemptive sports dramas often carry the burden of emotional despair and destruction and the usual formulaic cliches that come along with this genre. Director Gavin O’Connor’s foray into uncontrollable addiction in the soul-searching hoops showcase The Way Back is a golden three-point shot for the movie-maker and his inflicted leading man Ben Affleck. In fact, Affleck turns in one of his best on-screen performances in many years as a man struggling with his personalized demons as he returns to glory in the form of a high school basketball coach hired to inspire a disorganized team.

Thoroughly convincing and hitting close to home, Affleck’s real-life battle with alcoholism translates admirably into this fictional account of a broken soul trying to break out of a restrictive, paralyzing rut courtesy of the bottle. Honest, reflective and sobering, The Way Back manages to be absorbing and inspirational without any pretense beyond a wounded individual trying to piece his life together and serve as a mentor–flawed and frustrated–to the charges that look to him for guidance and stability.

Screenwriter Brad Ingelsby (“American Woman”) pens an affecting script that captures the sullen demeanor in Affleck’s defeated Jack Cunningham, a one-time basketball sensation from yesteryear whose fall from grace years later would afford him the opportunity for redemption and give back his time and energy to the impressionable young men on the basketball court needing some uplifting motivation. O’Connor, who has worked with Affleck previously in The Accountant, receives a solid turn from the actor willing to display his vulnerability in a piercing sports drama that is straight-forward in its depiction of destitution. There is nothing considered flashy or groundbreaking in The Way Back but the film does hold its true convictions to the chest.

Nowadays, the washed-up Jack is an alcoholic construction worker that inexplicably left behind a promising future as a gifted high school ballplayer in his youth. Unfortunately, Jack currently wallows at his favorite drinking hole where he has trouble walking a crooked line. At the job, Jack is constantly wasted by having way too many liquid lunches. Jack Cunningham is at the bottom of the barrel as his life is in self-destruction mode. Sadly, the man is performing a slow death without realizing it–or perhaps he is aware and just does not care?

The working class community of Torrance, California is the setting for the torn apart Jack Cunningham. Besides Jack, there are others that are in disarray but for completely different reasons–the local high school basketball team at Jack’s alma mater. Alarmingly, the team has not reached the playoffs since Jack graduated from the school. Desperate for someone to shake things up and bring in the winning spirit to an otherwise dejected team former standout athlete Jack is asked to accept the coaching job at the high school. Reluctantly, the drunken construction worker-turned-basketball coach takes the assignment but not without the unsteadiness and uncertainty.

No doubt that Affleck brings authenticity to a realistic role that mirrored his own troubled existence. The Way Back resourcefully claws at the root of Affleck’s Jack Cunningham–a person burdened by his dysfunctional drinking and the penalizing psychology that takes its toll. It is not so much what the personal fouls are on the basketball court more so than the personal foul being committed on a damaged wrecking ball of a man. Both harrowing and heartfelt, The Way Back is definitely a slam dunk for Affleck and the young men whose sporting spirit rests on the shoulders of a fallen idol trying to cope with his suffocating obstacles.